Posted on February 5, 2019 by Jennifer Ortiz 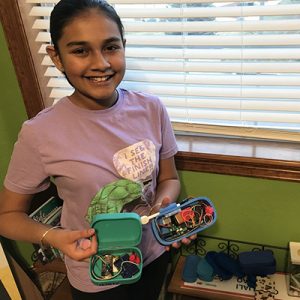 When you think back to a young, 13-year-old you, what do you see? Were you climbing trees? Playing some gnarly rounds of tag with friends? Attempting to get as much air as possible on playground swing sets? Not Gitanjali Rao. According to NPR, the 13-year-old science entrepreneur made the 2019 Forbes 30 Under 30 list before she even stepped into high school, and in 2017, the then 11-year-old was named ‘America’s Top Young Scientist’ for the design of a small, mobile device that tests for lead in drinking water.

And today, she’s onto the next project. Rao has set her eyes on bringing her water testing device Tethys—named after the Greek Titan goddess of clean water—to the market. The 3D-printed box uses carbon nanotube sensors to detect lead in water.

Her motivation behind the invention: the Flint water crisis.

“[Tethys] is for people who don’t really know what’s in their water from the pipes leading to their house,” says Rao, who is currently working with Selene Hernandez-Ruiz, a lab manager at Denver Water, to test and improve her device.

Rao hopes to get a prototype out into the world in the next two years.

Gerald Frankel, a professor of materials science and engineering at The Ohio State University, touched on the Flint water crisis matter in an ECS Podcast interview.

“It was avoidable,” said Frankel about the crisis.