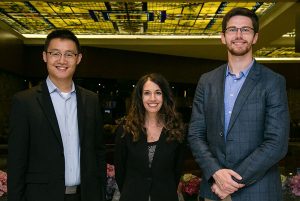 Steven Lacey is one of the winners of the 2018 Battery Division Student Research Award sponsored by Mercedes-Benz Research & Development (check out the other winner, Fudong Han).

Lacey’s passion for electrochemistry and engineering began at a young age when he realized the need for a more fuel-efficient means of transportation while restoring classic cars with his father.

As an undergraduate at the University of Maryland, he began collaborative energy storage research with Kang Xu and Arthur v. Cresce at the U.S. Army Research Laboratory, where he developed a planar device platform to study alkali-metal-ion battery operation at the nanoscale. Over several DoD internships, his research efforts began to expand into additional topics including optoelectronics, plasmonics, and material development for defense-related interests (body armor, smoke obscurants). After obtaining his BS in materials science and engineering, he started his PhD at his alma mater under the continued supervision of Liangbing Hu.

Lacey is a recipient of the 2015 National Defense Science and Engineering Graduate Fellowship and serves as president (2017-2018) of the ECS UMD Student Chapter. He has published 30 peer-reviewed papers.

The Battery Division Student Research Award was established in 1979 to recognize promising young engineers and scientists in the field of electrochemical power sources with the intention to encourage recipients to initiate or continue careers in the field. With the generous sponsorship of Mercedes-Benz Research & Development, the Battery Division is now able to provide two deserving students with an annual prize of $1,000 each and travel support to attend the ECS biannual meeting at which their achievements are recognized. ECS extends many thanks to Mercedes-Benz Research & Development for its support.