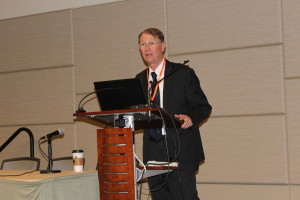 With the scope and size of the energy infrastructure in mind, Orr notes that the critical improvements that are needed in sustainable energy will not be achievable overnight.

“Nevertheless, there have been remarkable changes in energy over the past few years,” says Orr.

Those changes include such things as a decreased gas consumption and increased deployment of wind and solar.

“The primary driving force now to change the energy system is to reduce greenhouse gas emissions and aid in relieving the effects of climate change,” says Orr.

To make widespread changes in clean energy, Orr notes the importance of the grid and how it plays a role. Since the grid has been steadily electrifying the plant for many decades, it shows great flexibility and potential. The challenge comes in supplying electricity to the grid in a clean and cost effective manner. Possible ways to achieve this goal include the use of semiconductors, restructuring the site architecture (microgrids), new and cheaper sensors to analyze the activity of the grid, and the utilization of solid state transformers.

During his address, Orr also touched on the issue of the lack of reliability for alternative energy sources such as solar. Essentially, how do we provide reliable power when the sun goes down?

“Storage matters,” says Orr. “It’s a complicated landscape, but I think energy storage is one of the most exciting areas out there.”

Through the integration of storage with the energy infrastructure and addressing the topic in an interdisciplinary nature, Orr believes the country could move towards a more sustainable future.

All Hands on Deck

“You can think of the electrical power system as a complex system of systems,” says Orr. “We need all the players we can get on the field in this energy transformation.”

Orr brought the potential in clean electric power, carbon capture and storage, and alternative energy solutions to the forefront of his speech. Citing the unexplored possibilities in hydropower, the ever-increasing economic and energy impact of wind power, and the rapidly expanding market of solar technology—Orr’s address urged attendees to continue their innovative work in sustainable energy.

“We can put the world’s most creative minds together to change the world,” says Orr. “So let’s get to work.”