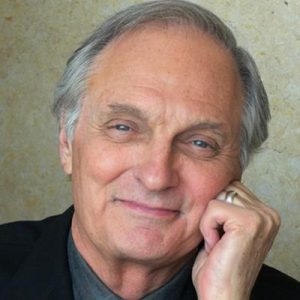 For the legendary actor Alan Alda, it was the same curiosity that drew him into acting that propelled him into the world of science.

“I remember as a kid always trying to figure out why things were the way they were. How they got to be the way that they were,” says Alda. He was fascinated with the world around him, from examining a flame at the end of a candle to contemplating human behavior. “Why did adults say the things they said and why they behave the way they did?”

Then, an opportunity arose that mixed a little bit of each world. Alda was asked to host the television show Scientific American Frontiers. A show that discussed new technologies and discoveries in science and medicine.

“I said ‘yes’ on the condition I could actually interview the scientists and not just read a narration,” says Alda, “because I really wanted to hear from the scientists about their work. And I wanted to understand it better. That kind of lead to what I do now which is to help scientists communicate better.”

As the host, Alda would have scientists explain their area of expertise in layman’s terms. “They had to make me personally understand what their answers were,” says Alda. That meant scientists had to go from reciting their standard lectures to making a personal connection with Alda, and consequently, the audience.

“I was able to use my background as an actor to help scientists make that connection,” says Alda, which led to the birth of the Alan Alda Center for Communicating Science. The Alda Center was created with the goal to empower scientists and health professionals to communicate complex topics in clear, vivid, and engaging ways. The organization offers workshops in improvisational theater and message design to address the common pitfalls of science communication.

The M*A*S*H actor recently revealed he was diagnosed with Parkinson’s three-and-a-half years ago, according to CBS News. He says he’s had a full life, including his center, acting career, and new podcast Clear+Vivid, which explores all the ways in which people communicate with each other. Alda’s passion for communication is one of the reasons he decided to speak out about his Parkinson’s diagnoses, to send a message of hope to those who might be facing the disease.

The Electrochemical Society offers engaging biannual meeting, as an opportunity for scientists to meet, communicate, and present their work. Join ECS at AiMES 2018 in Cancun, Mexico from September 30 – October 4, 2018 for a unique blend of electrochemical and solid state science and technology.

Hear Alda’s full-length interview on the ECS Podcast below.