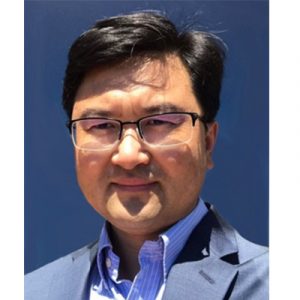 ECS and the ECS Pacific Northwest Section presented Prof. Xiulei “David” Ji’s webinar, “Aqueous Battery Chemistry: Considerations from a Reaction’s Perspective” on March 4, 2021. His answers to questions following the presentation are provided below. The webinar is now available for viewing.

Xiulei “David” Ji is an Associate Professor of Chemistry at Oregon State University, U.S. His research focuses on design principles of materials chemistry for electrochemical energy storage. Ji received a 2016 NSF CAREER Award and was a Web of Science Group Highly Cited Researcher in 2019 and 2020. He is currently an Associate Editor of Carbon Energy. He completed his PhD in Materials Chemistry at the University of Waterloo, Canada, in 2009. From 2010-2012, he was an NSERC Postdoctoral Fellow at the University of California, Santa Barbara, U.S.

Q1. How does the potential of the negative electrode depend on the adsorption energy? How to optimize this?

Q2. What do you think about the performance of the entire cell system? What is the solubility of Cu species in organic electrolytes?

Q3. How do the hydrated sizes of the ions compare to the kinetics of intercalation into V2O5?

The hydrated ions would be too big for the bilayered V2O5 (vanadium oxide) to host. Dehydration before crossing the interface is expected.

Q4. Is NiOOH a “Grotthuss” battery?

NiOOH reduces to Ni(OH)2 during discharge, and the typical charge carrier for this cathode is hydroxide in alkaline electrolytes. However, the net change is a hydrogen atom (a proton plus an incoming electron). The mechanism of this electrode’s redox reactions is very intriguing. It seems that more fundamental studies might be needed to understand the mechanism better. Yet, for example, beta-NiOOH’s lattice does not contain water molecules with its seemingly dense structure. Grotthuss mechanism might not be applicable to explain the often-good rate of this material, particularly when it is nanosized.

Q5. Is there any possibility of the different structure within Prussian blue called “confined effect?” The structure of water inside PB is the same as that in the bulk water?

The structure of water inside PB may resemble ice more than liquid water because the freedom of confined water molecules might be less.

Q6. What is your opinion on the degree to which water-in-salt electrolytes effect thermodynamics of the water decomposition reactions?

The potentials of water’s electrolysis relate to its frontier orbitals, where these orbitals’ energies might change depending on the chemical environment. WiSE (water-in-salt electrolyte) often provides a very different chemical environment than liquid water or dilute electrolytes. As a sign, the O-H bond length can be different in WiSE. The inductive effect of cations and the shielding effect of anions may play out as well.

Q7. Is Grotthus capacitance a combination of EDLC and redox behavior?

Q8. What is the capacity retention in Cu-S battery? What is the cell volume change in structure when Cu2S forms compared to polysulfides?

The Cu-S electrode can deliver stable cycling performance, partially due to the good electronic conductivity of CuS and Cu2S. The volume increase from sulfur to Cu2S is 85 percent, theoretically.

Q9. Of all the electrolyte/electrode combinations you’ve investigated, which seem most promising to meet global energy demands here in the next 10 years?

Q10. Are we talking about capacitance or fast kinetic redox processes?

Q11. How do water molecules act in such water-in-salt electrolytes or concentrated electrolytes, as (you) claimed there is no free water in such systems? Do they undergo such H2 bond transfer as you discussed?

In WiSE, it is often claimed that there exist no free water molecules. The argument comes from the stoichiometry of the solvation structure, where there are fewer water molecules than needed to form the primary hydration sheath of cations. In WiSE, water molecules are less likely to form a contiguous hydrogen bonding network. Grotthuss mechanism would be interrupted in WiSE.

Consult the ECS Blog for more information about the ECS Pacific Northwest Section.