While silicon has remained the dominant material in the field of electronics, the dimensions of the transistors have changed drastically throughout the years. The iconic Moore’s law dictates that transistor density doubles every two years, driving individual transistors to become smaller, while the processing power of the chips themselves increases.

Silicon has facilitated Moore’s law for the past decades, but it is now becoming much more difficult to continue the projected growth. Researchers are beginning to look at new materials such as 2D black phosphorus or metal dichalcogenides and graphene to continue electronic growth.

“That’s part of the fun,” says Ren. “Everyone is competing with each other to find the next big thing.”

At the University of Florida, Ren and his team are working on the development of gallium nitride-based sensors. Working from existing technology, Ren and his team have been able to make advancements that could potentially save lives around the world. 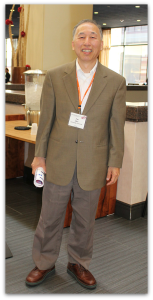 By functionalizing the already-existing semiconductor devices and adding the biomarkers and antibodies that can detect a multitude of cancers, Ren and his team are opening new doors in the arena of cancer detection—specifically, the detection of breast cancer.

The non-invasive testing method developed by Ren and his colleagues allows for women to screen for breast cancer by placing a small sample of saliva on a device. The data from this is then wirelessly transmitted to be analyzed, allowing testing to be done frequently and even from the comfort of one’s own home. Additionally, the chips required for this test are very cheap.

These sensors are also versatile and could be changed to detect anything from prostate cancer to carbon monoxide. While the materials used to make new electronics may be in question, it’s clear that the future of the field still holds very much potential.

With the research from Ren and other scientists around the world, electronics will continue to thrive and provide solutions to some of the world’s biggest challenges.

For more information about the future of electronics, listen to our podcasts with Yue Kuo, leader in solid state science and Lili Deligianni, researcher at IBM’s Thomas J. Watson Research Center.