Presented by Kelsey A. Stoerzinger on July 26

The webinar is open to the public; ECS membership is not required.
You must pre-register through ECS My Account.
Don’t have one? It’s easy to create–visit Create an Account now.

The intermittent nature of renewable energy sources requires a clean, scalable means of converting and storing energy. One earth-abundant storage option is water electrolysis: storing energy in the bonds of O2 and H2, and later extracting electricity by the electrochemical reaction of gasses in a fuel cell. Nickel oxides are notably active for oxygen electrocatalysis in alkaline solutions, and the perovskite structure (ANiO3) in particular. Studies are presented of model oxide electrodes grown by pulsed laser deposition (PLD) and molecular beam epitaxy (MBE) on single crystal substrates that display a known crystallographic orientation, strain, surface area, and path for charge transport. Electrochemical measurements on these heterostructures can establish the intrinsic activity of oxide catalysts in a way that cannot be realized with polydisperse nanoparticle systems. These findings are used to rationally design the nickelate composition and structure to maximize activity. Additional insight into the mechanism of the oxygen evolution reaction (OER) is obtained from spectroscopic probing of adsorbates with ambient pressure X-ray photoelectron spectroscopy (AP-XPS), pH dependence of activity, and measurements of oxygen isotope exchange. This fundamental understanding aids in the design of active, earth-abundant electrocatalysts for efficient conversion of renewable energy into chemical fuels.
REGISTER NOW 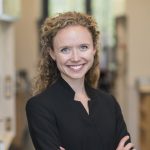 Dr. Kelsey A. Stoerzinger is an Assistant Professor in the School of Chemical, Biological and Environmental Engineering at Oregon State University, U.S. She holds a joint appointment at Pacific Northwest National Laboratory, where she was a Linus Pauling Distinguished Postdoctoral Fellow. Kelsey completed her doctoral studies in Materials Science and Engineering from the Massachusetts Institute of Technology, U.S., supported by a National Science Foundation Graduate Research Fellowship. She completed an MPhil in Physics at the University of Cambridge, England, as a Churchill Scholar and a BS at Northwestern University, U.S. Prof. Stoerzinger received the NSF CAREER Award and the Doctoral New Investigator Award of the ACS-PRF, in addition to recognition for her contributions as a teacher and advisor.