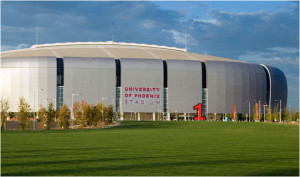 After the football teams and fans have left the stadium, after the television crews have wrapped up their interviews for the night, the stadium remains a-glow. This is the first time ever that a Super Bowl stadium has shone so brightly and with such an eye toward the environment.

“Sunday’s game between the New England Patriots and the Seattle Seahawks marks the first Super Bowl illuminated by LED lights, which boast an estimated 75 percent reduction in power and nearly double the glow of traditional metal halides—like the ones previously installed at the Phoenix, Arizona, stadium when it was built in 2006.

The stadium’s new set of 312 LED fixtures only need about 310,000 watts of power, compared with the 1.24 million watts of power required by the 780 metal halide bulbs.”

With this massive change over from traditional bulbs to LED lights, stadiums like the one in Phoenix and other around the country will have made significant strides toward green energy and hopefully LEED certification.

To learn more about LED lighting, check out our Digital Library.