Posted on December 3, 2018 by Jennifer Ortiz 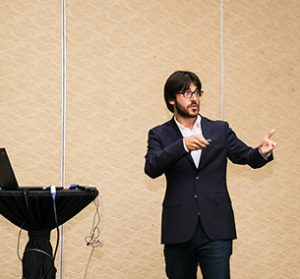 Jon Ustarroz, assistant professor of the Analytical & Interfacial Chemistry group at the Université libre de Bruxelles and part-time research professor of the Electrochemical and Surface Engineering group (SURF) at the Vrije Universiteit Brussel, is the recipient of the Electrodeposition Division Early Career Investigator Award for his paper on “Electrochemical Growth Mediated by Nanocluster Aggregation: Implications and Perspectives.” He was honored with the award at AiMES 2018 in Cancun, Mexico.

Ustarroz says he’s proud to be a recipient of the award, which adds to his recognition within the field.

“For somebody who is young like me, and little people know about within the academic community, this has allowed me to get higher visibility and to prove to people who do not know me of what I’m capable of,” says Ustarroz.

He says because of this, the award has allowed him to establish new connections within the Electrodeposition Division, opening the door to more opportunities.

“I was able to talk with a lot of established researchers in the field that I had seen before at other ECS meetings that I didn’t have the opportunity to talk with,” says Ustarroz.

He also had the opportunity to attend the Electrodeposition Division luncheon.

“And thanks to that, I’m on the way to become more involved and will participate in organizing symposiums in the division. You don’t need to have the award for that, but in my case, since I didn’t know many of the people personally, it helped me a lot,” says Ustarroz. “This award opened me to the possibility to have dialectics with people in the division. It was the first time that I participated in this way; it was a great experience.”

Ustarroz has recently embarked on a new journey, as an assistant professor at Université libre de Bruxelles, since being nominated for the Electrodeposition Division Early Career Investigator Award as a postdoctoral researcher at Vrije Universiteit Brussel, which he credits in part to the award.

“I think that the fact of having the award played a big role in getting this opportunity,” says Ustarroz.

Ustarroz’s winning paper focuses on understanding the fundamentals of the very early stages of electrochemical growth.

“During my PhD, my postdoc, and career up till now, I have focused on revisiting some of the theories that try to explain the very early stages of electrochemical growth by using a carbon coated TEM grid, a type of substrate that allows me to image my samples with transmission electron microscopy and directly combine that information with electrochemical data,” says Ustarroz. He says in his research, he noticed the surface diffusion and aggregation of nanoclusters, which had not been taken into account previously.

“In this way, I was able to discover a growth mechanism that wasn’t considered before,” says Ustarroz. “I hope that by better understanding these phenomena, we are able to deposit nanostructured materials with better properties —surface area, catalytic activity, etc.—for energy conversion and storage.”

Ustarroz, a member of ECS since 2013, is the author of 30 publications. He continues his research on non-traditional electrochemical nucleation and growth pathways from aqueous solutions and deep eutectic solvents at both the Université libre de Bruxelles and the Vrije Universiteit Brussel. He is also involved in developing a multi-scale numerical modelling platform for investigating elementary electrodeposition processes.

Read more on ECS’s many division awards and other AiMES 2018 award winning recipients.