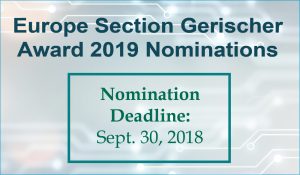 The award consists of a commemorative plaque and a prize of EUR 2000. If required, financial assistance will be provided for non-reimbursed travel expenses incurred to receive the award (not to exceed EUR 1000).

Nominations can be made by a single scientist or a group of scientists. Self-nomination is not permitted. The nomination package shall include the following documents:

The 2017 winner of the Gerischer Award was Kazuhito Hashimoto who is president of the National Institute for Materials Science.