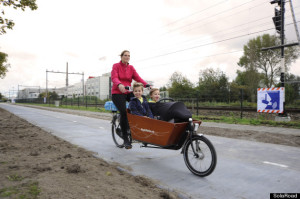 While the modules do produce clean energy, they are 30 percent less efficient than roof-mounted solar panels, as these can be aligned to the sun.

SolaRoad gives this brief description of how the path works:

The pilot road of just a hundred meters consists of concrete modules each of 2.5 by 3.5 meters. Solar cells are fitted in one travelling direction underneath a tempered glass top layer which is approximately 1-cm thick. There are no solar cells on the other side of the road and this is used to test various top layers. In time, the solar power from the road will be used for practical applications in street lighting, traffic systems, electric cars (which drive on the surface) and households.

Stay current in the ever-evolving world of solar energy by reading the latest research in the ECS Digital Library! And make sure to check out the ECS Conference on Electrochemical Energy Conversion & Storage with SOFC-XIV, where you can meet with some of the brightest minds in electrochemical and solid state science and get involved in the conversation.