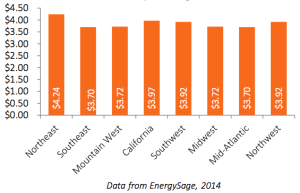 The Lawrence Berkeley national Laboratory reports that the median cost of residential solar has gone from approximately $12/W in 1998 to about $4.70/W in 2013. Pair this more than 60 percent decline with the rising cost of grid electricity, and solar’s value to the customer becomes all the more clear.

Because of these scientific breakthroughs leading to the price decline in solar, more people are investing and federal, state, and local incentives and public policies are being established. If you’re in the United States, click here to check out what your state is doing.