Lesser-Known Relative of the Laser Could Leave the Lab Soon

Posted on February 9, 2018 by Amanda Staller 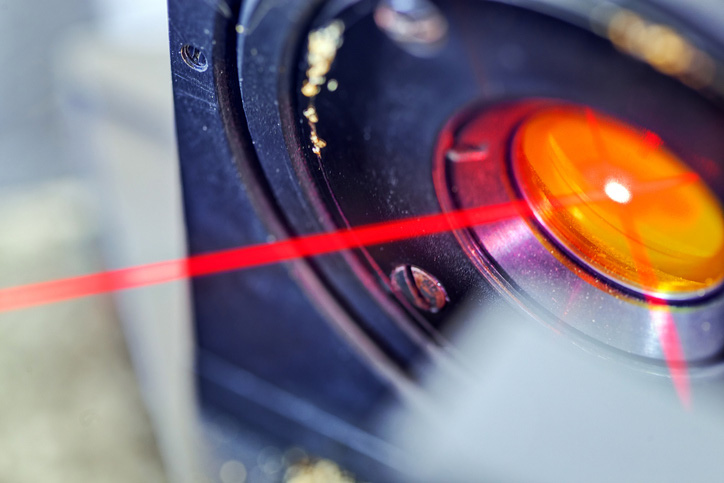 Researchers may have found a way to solve the weakness of a type of light source similar to lasers. The alternative light source could lead to smaller, lower-cost, and more efficient sources of light pulses.

Although critical for varied applications, such as cutting and welding, surgery and transmitting bits through optical fiber, lasers have some limitations—namely, they only produce light in limited wavelength ranges.

Until now, these lesser-known light sources have been mostly confined to the lab because their setup leaves little room for error—even a minor jostle could knock one out of alignment.

Their work, which appears in Physical Review Letters, demonstrates a new way to produce femtosecond pulses—pulses measured by quadrillionths of a second—in desirable wavelength ranges using this light source. The technology could potentially lead to better detection of pollutants and diseases by merely scanning the air or someone’s breath.

The light source these researchers study consists of an initial step where pulses of light from a traditional laser are passed through a special crystal and converted into a wavelength range that’s difficult to access with conventional lasers. Then, a series of mirrors bounce the light pulses around in a feedback loop. When this feedback loop is synchronized to the incoming laser pulses, the newly converted pulses combine to form an increasingly strong output.

Traditionally, people could not convert much of the initial light pulses into the desired output with such a contraption. But to be effective in real-world applications, the group had to bump up that percentage.

“We needed higher conversion efficiency to prove it was a source worth studying,” says Alireza Marandi, a staff member in the Ginzton Lab at Stanford University. “So we just say, ‘OK, what are the knobs we have in the lab?’ We turned one that made the mirrors reflect less light, which was against the standard guidelines, and the conversion efficiency doubled.” The researchers published their initial experimental results two years ago in Optica.

Cranking up the power in a conventional design usually results in two undesirable outcomes: The pulses lengthen and the conversion efficiency drops. But in the new design, where the researchers significantly decreased the reflectivity of their mirrors, the opposite occurred.

“We were thinking about this regime based on the standard design guidelines, but the behavior we would see in the lab was different,” says Marc Jankowski, lead author of the paper and a graduate student in the Ginzton Lab. “We were seeing an improvement in performance, and we couldn’t explain it.”

In the palm of a hand

After more simulations and lab experiments, the group found that the key was not just making the mirrors less reflective but also lengthening the feedback loop. This lengthened the time it took for the light pulses to complete their loop and should have slowed them too much. But the lower reflectivity, combined with the time delay, caused the pulses to interact in unexpected ways, which pulled them back into synchronization with their incoming partners.

This unanticipated synchronization more than doubled the bandwidth of the output, which means it can emit a broader span of wavelengths within the range that is difficult to access with conventional lasers. For applications like detecting molecules in the air or in a person’s breath, light sources with greater bandwidth can resolve more distinct molecules. In principle, the pulses this system produces could be compressed to as short as 18 femtoseconds, which can be used to study the behavior of molecules.

The decision to reduce the mirror reflectivity had the surprising consequence of making a formerly persnickety device more robust, more efficient, and better at producing ultra-short light pulses in wavelength ranges that are difficult to access with traditional lasers.

The next challenge is designing the device to fit in the palm of a hand.

“You talk with people who have worked with this technology for the past 50 years and they are very skeptical about its real-life applications because they think of these resonators as a very high-finesse arrangement that is hard to align and requires a lot of upkeep,” says Marandi, who is also coauthor of the paper. “But in this regime of operation these requirements are super-relaxed, and the source is super-reliable and doesn’t need the extensive care required by standard systems.”

This newfound design flexibility makes it easier to miniaturize such systems onto a chip, which could lead to many new applications for detecting molecules and remote sensing.

“Sometimes you completely reshape your understanding of systems you think you know,” Jankowski says. “That changes how you interact with them, how you build them, how you design them, and how useful they are. We’ve worked on these sources for years and now we’ve gotten some clues that will really help bring them out of the lab and into the world.”

Additional coauthors of the paper are from Stanford University, ETH Zurich, and the US Military Academy at West Point.

The US Department of Defense and the National Science Foundation funded the research.