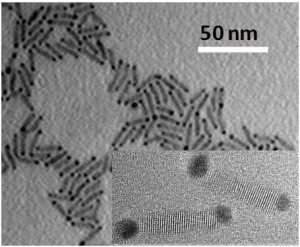 The new process uses light to do photochemistry instead of the traditional method of using heat to do chemistry.
Image: Emory University

Scientists from Emory University are opening yet another door to renewable energy efforts. Their new way of performing light-driven reactions based on plasmon—the motion of free electrons that strongly absorb and scatter light—is said to be much more effective than previous processes.

“We’ve discovered a new and unexpected way to use plasmonic metal that holds potential for use in solar energy conversion,” says Tim Lian, professor of physical chemistry at Emory University and the lead author of the research. “We’ve shown that we can harvest the high energy electrons excited by light in plasmon and then use this energy to do chemistry.”

To get a better understanding of surface plasmonic, just think of how a cathedral’s stained glass windows absorb and shatter light.

This from Emory University:

Through experimentation, they found that coupling nano-rods of cadmium selenide, a semi-conductor, to a plasmonic gold nanoparticle tip allowed the excited electrons in the gold to escape into the semi-conductor material.

“If you use a material with a certain energy level that can strongly bond to plasmon, then the excited electrons can escape into the material and stay at the high energy level,” Lian says. “We showed that you can harvest electrons before they crash down and relax, and combine the catalytic property of plasmon with its light absorbing ability.”

In the future, the researchers hope their process could transfer into water-splitting applications, thereby yielding the ability to produce hydrogen.