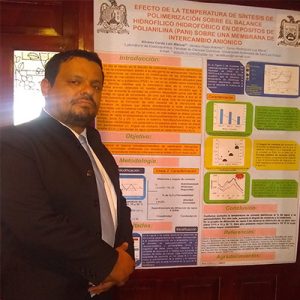 The XXXIV National Congress of the Mexican Society of Electrochemistry (SMEQ) and 12th Meeting of the ECS Mexico Section—held this June in Santiago de Querétaro, Mexico—honored Luis Manuel Alvarez Cerda for his work, titled, “Effect of the Polymerization Synthesis Temperature on the Hydrophilic/Hydrophobic Balance in Polyaniline Deposits (PANI) on an Anion Exchange Membrane.”

Each year, SMEQ hosts a poster session which awards prizes by degree (bachelor’s/master’s/doctorate). Alvarez took home the main prize for the best doctorate poster, which includes the opportunity to present at a future ECS biannual meeting.

Luis Manuel Alvarez Cerda, chemist since 2005, received his master’s degree in chemistry in 2007. In 2008, the chemistry company Igcar de México/Produquímicos Industriales hired Luis Alvarez to work in the L&D department where he developed more than 30 new products and more than 50 new raw materials until 2017.

In 2017, Luis Alvarez went on to become employed by the automotive Japanese company Midori Autoleather where he worked as a coordinator of the physical and chemical test laboratory until 2018.

In 2018, Luis Alvarez began working towards his doctorate degree in chemistry, which he is still pursuing today.

Luis Alvarez has 10 years of experience in water base inks and coatings and their physical and chemical evaluation under international standard. He has a background in electrodialysis and polymeric deposits.

Title: Effect of the Polymerization Synthesis Temperature on the Hydrophilic/ Hydrophobic Balance in Polyaniline Deposits (PANI) on an Anion Exchange Membrane

In literature, films of polyaniline (PANi) obtained at low synthesis temperature have had better crystallinity and low electrical resistance. This is why it is interesting to use PANi deposit on exchange membranes at low temperature and evaluate the performance.

In this work, the electrodeposit temperature was 10, 15 and 20 °C using cyclic voltamperometry with 100 cycles. The evaluation was on hydrophobicity, hysteresis, permeability, water content, and crystallinity.

The principal results were that the hydrophobicity and hysteresis increase, but the water content and permeability decrease with the temperature. Finally, the better crystallinity was been obtained at 15 °C.