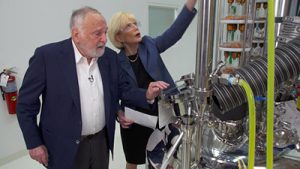 “Cellulose is everywhere. I mean, there’s just so much cellulose in the world and nobody had managed to use any of it,” explained Medoff, as he chatted with correspondent Lesley Stahl on 60 minutes. “I said, ‘Wow, if I can break through this, we can increase the resources of the world maybe by a third or more.’ Who knows?”

The novice scientist eventually began using electron accelerators to access the valuable sugars inside plant life. His invention soon after caught the interest of investors who saw the potential in Medoff and his company Xyleco, earning him millions. Also catching the attention of former Shell Oil executive Sir John Jennings, and three former cabinet secretaries – Steve Chu of the Department of Energy, George Shultz, former secretary of state and former defense secretary, William Perry, all now board of directors at Xyleco.

“He has all the attributes to many successful scientists. You have to believe in yourself. You have to say, ‘This is going to work,'” says Chu, a Nobel Prize winner for his work in Physics and plenary speaker of the 232nd ECS Meeting for his work in “The Role of Electrochemistry in our Transition to Sustainable Energy.”

Chu believes there’s enough biomass to make a significant difference in how the world obtains ethanol and gasoline.

“But the question is: can Marshall Medoff scale up his operation enough to compete with the oil industry?” asks Chu.