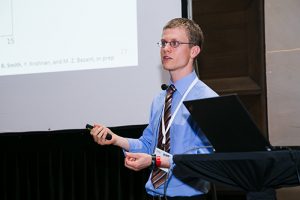 Raymond Smith was presented with the Norman Hackerman Young Author Award for his paper on “Multiphase Porous Electrode Theory” published in the Journal of The Electrochemical Society. The award recognizes the best paper published by young authors or co-authors in JES the prior year.

Smith, who holds a PhD in chemical engineering from MIT and works as a senior engineer at Tesla, said he was blown away when he heard he was nominated for the award.

“Being in the community and engaging in this way has been special,” says Smith, who was presented with the award at AiMES 2018 in Cancun, Mexico. “Coming to the meeting has provided great motivation.”

His paper aimed to unify work that his team and other teams have done in the field in order to highlight connections that weren’t obvious before.

“I hope it provides a useful resource that maybe shows similarities between works that maybe people weren’t aware were there before,” says Smith.

Smith’s paper focuses on battery modeling—understanding exactly what is going on inside of a cell or a battery to improve the design and make it more effective and use it to its fullest potential.

“They’re incredibly sophisticated systems,” says Smith. “At some level, batteries are just kind of like springs. You push on them and they store energy, and then you let go, and they give you back energy. It’s a perfect physical analogy in many ways. But instead of being a mechanical system, they’re chemical systems. And so that entails huge extra complexities in terms of how you think about them and how you would describe them—and a lot we don’t know.”

He hopes that with his paper, it will provide researchers further information to help in the design of battery models that are more physically correct.

“And so hopefully, that enables researchers to use batteries more aggressively while still being safe and design generally more efficient batteries,” says Smith.

Norman Hackerman Young Author Award was created in honor of Norman Hackerman, a PhD graduate in physical chemistry from Johns Hopkins University. He was a member of ECS for more than 60 years and served as ECS President from 1957-1958. His research focused on the electrochemistry of corrosion, its mechanism, and the processes to prevent or inhibit corrosion.