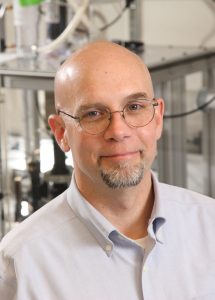 The Electrochemical Society has appointed Robert G. Kelly of the University of Virginia School of Engineering & Applied Science as the new editor of Interface, the Society’s quarterly magazine, for a four-year term.

In publication since 1992, Interface serves as an authoritative yet accessible forum for the exchange of information relevant to the fields of electrochemical and solid state science and technology. The four-color magazine publishes technical articles, special features, and news for and about ECS members. The publication is currently in its 27th volume year.

Kelly is the AT&T Professor of Engineering and the codirector of the Center for Electrochemical Science and Engineering at UVA. Since becoming an ECS member in 1982, he has fulfilled various roles within the Society, serving as a division chair, a symposium organizer, and a member of several standing committees.

Kelly has been conducting research in electrochemical science and engineering for the past 35 years. After completing his PhD studies at Johns Hopkins University (1989), he spent 2 years at the Corrosion and Protection Centre at the University of Manchester (UK) as a Fulbright Scholar and an NSF/NATO postdoctoral fellow. He joined the faculty of the UVA Department of Materials Science & Engineering in 1990.

Kelly was the 2001 recipient of the Robert T. Foley Award from the ECS National Capital Section. In 2010 Kelly was named an ECS fellow, and in 2016 he was awarded the H. H. Uhlig Award of the ECS Corrosion Division. He is also a fellow of NACE International. In 2013 he was awarded the AT&T Professorship. Kelly has won several teaching awards while at UVA, including an All-University Teaching Award in 2004. He has rendered technical assistance to the NRC and DOE concerning the Yucca Mountain Project, the USAF Aging Aircraft Program, the NASA Safety and Engineering Center, and the 9/11 Pentagon Memorial design team.