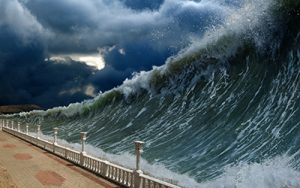 On a Friday afternoon in 2011, residents of northeastern Japan were hit by a six minute earthquake—shifting the country’s main island by eight feet— triggered powerful tsunami waves that reached up to 120 feet in height, according to Futurity.

Tsunami warnings had initially broadcasted minutes before its arrival; unfortunately, underestimating its size. Many failed to evacuate to higher ground as a result; a total of 15,894 deaths resulted from the natural disaster. Japan has since installed a network of seismic and pressure sensors on the ocean floor that have raised the bar for tsunami early-warning systems worldwide.

New research, which appears in Geophysical Research Letters, suggests how warnings could be more accurate by combining data streaming in real-time from sensors, like those in Japan, with tsunami simulations.

“Most tsunamis are caused by an offshore earthquake that pushes the ocean up or down. As gravity pulls the water back toward equilibrium, a tsunami is born,” says Eric Dunham, senior author and associate professor of geophysics at Stanford University’s School of Earth, Energy & Environmental Sciences. “But tsunamis can also be generated in other ways. Underwater landslides, which might accompany an earthquake or occur independently, are a classic example. Traditional warning systems completely miss tsunamis from those types of sources.”

Current tsunami warning systems begin with an estimate of earthquake properties from seismic waves, then utilize precomputed relations between earthquakes and the tsunamis they generate, explains Dunham.

“Yuyun figured out how to apply a data assimilation technique, known as the ensemble Kalman filter, to rapidly reconstruct the tsunami wavefield,” says Dunham of lead author Yuyun Yang, who uses tsunami wave propagation simulations to ultimately the wave height and arrival time at the coast.

“This new technology—offshore sensors connected via fiber-optic cable to land—allows the data to stream in almost real time back to computers where it can be processed and used in warning systems,” says Dunham.

The evolution of sensor technology not only transforms the quality of natural disaster detections, like tsunamis, but it also touches on other areas of life, from the food we eat to aiding human-machine interactions.

Get the scoop on the latest research in the sensors field in the Journal of The Electrochemical Society.