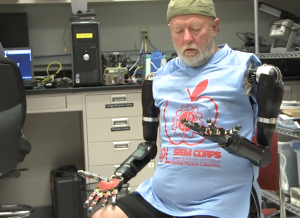 While others have been able to control robotic limbs with their minds, the technique is new enough that dual-control has never been tried before.
Credit: Johns Hopkins

History was made when the first bilateral shoulder-level amputee was able to wear and simultaneously control two prosthetic limbs. The amazing part? He was able to operate the system by simply thinking about moving his limbs.

The groundbreaking event took place at Johns Hopkins Applied Physics Laboratory, where they’ve been working to develop Modular Prosthetic Limbs as part of the Revolutionizing Prosthetics Program over the past decade.

Les Baugh was the man who made the limbs come to life. Baugh lost both arms in an electrical accident 40 years ago and until now, did not think having two functional, mind-controlled prosthetic limbs was in the realm of possibility.

END_OF_DOCUMENT_TOKEN_TO_BE_REPLACED 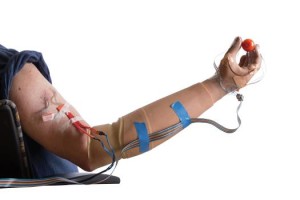 Prosthetic limbs help amputees with mobility and functionality, but do not allow one to regain their sense of touch. Scientists and engineers have been attempting to re-create touch for those who have lost limbs for some time now, and they may have found the answer.

A study published in Science Translation Medicine states that long-lasting, natural-feeling sensations are now able to be produced artificially for those with prosthetic limbs. Of course, those using the device cannot physically feel the ball. Although, the patterns of electric singles that are sent by a computer into nerves around the patient’s arm will tell him or her differently.