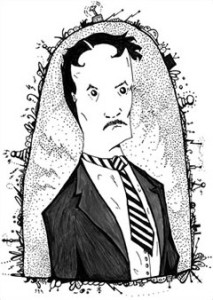 Tesla was known for discovering amazing things and then forgetting to write them down.

You know his name, but how much do you really know about Nikola Tesla? The writers over at The Oatmeal want you to be aware of all of Tesla’s glory, and put together quite the comic to demonstrate it.

This from The Oatmeal:

Over one hundred years ago, a Serbian-American inventor by the name of Nikola Tesla started fixing things that weren’t broken… Tesla’s contributions were not incremental; they were revolutionary.

Learn more about this underdog and his inventions and contributions to science, which included: alternating current, hydroelectricity, cryogenic engineering, the remote control, neon lighting, and wireless communication just to name a few.

Check out the comic here.

Although The Oatmeal paints Thomas Edison – Tesla’s competitor and often times rival – as “a non-geek who operated in geek space,” we at ECS are still proud to have had him as a member of the Society.

If you’re looking for more humorous renditions of Tesla’s storied past, check out this Drunk History rendition via Funny or Die.