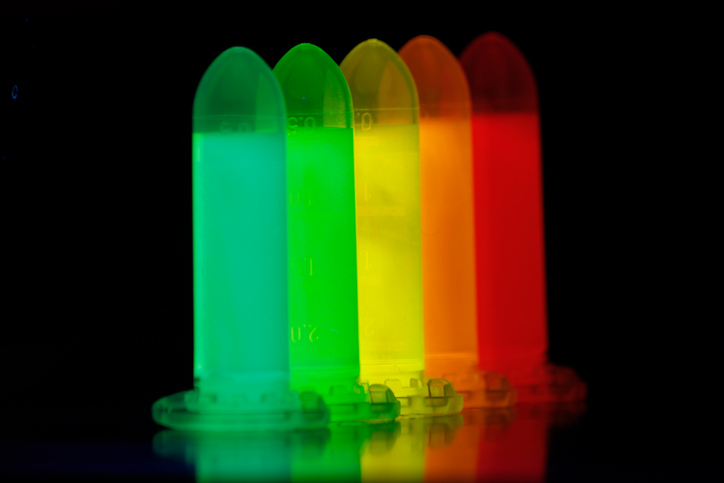 Researchers have found an explanation for why a certain class of quantum dots shines with such incredibly bright colors.

The nanocrystals in question contain caesium lead halide compounds arranged in a perovskite lattice structure. Three years ago, Maksym Kovalenko, a professor at ETH Zurich and the Swiss Federal Laboratories for Materials Science and Technology (Empa), succeeded in creating nanocrystals from the same semiconductor material.

“These tiny crystals have proved to be extremely bright and fast emitting light sources, brighter and faster than any other type of quantum dot studied so far,” says Kovalenko.

By varying the composition of the chemical elements and the size of the nanoparticles, Kovalenko also  produced a variety of nanocrystals that light up with the colors of the entire visible spectrum. These quantum dots could be used as components for future light-emitting diodes (LEDs) and displays.

END_OF_DOCUMENT_TOKEN_TO_BE_REPLACED

Discovery Could Take Guesswork out of Making Quantum Dots

In a new paper, researchers describe the underlying mechanisms involved in creating a widely used class of quantum dots that use cadmium and selenium compounds as their molecular precursors.

For more than 30 years, researchers have been creating quantum dots—tiny, crystalline, nanoscale semiconductors with remarkable optical and electronic properties.

They’ve applied them to improve television sets, for example, to greatly enhance color. A host of other applications are in the works, involving integrated circuits, solar cells, computing, medical imaging, and inkjet printing, among others.

But quantum dot synthesis has occurred largely by trial and error, because little has been understood about how the chemicals involved in making quantum dots—some highly toxic—actually interact to form the resulting nanoparticles. The new research may change that, revealing more about the process of quantum dot formation.

Ironically, the team also discovered that, at one point during this process, the safer, more controllable compounds now employed decompose into the same highly toxic compounds that were used in initial quantum dot production 30 years ago.

END_OF_DOCUMENT_TOKEN_TO_BE_REPLACED

Will ‘Platelets’ Replace Quantum Dots in Your TV?

Like quantum dots, these two-dimensional structures are just a few nanometers in size, but have a more uniform flat, rectangular shape. They are extremely thin, often just the width of a few atomic layers, giving the platelets one of their most striking properties—their extremely pure color.

Now scientists have solved the mystery of out how these platelets form—and then created them in the lab using pyrite.

END_OF_DOCUMENT_TOKEN_TO_BE_REPLACED

Quantum dots may be just the thing to take renewable energy technology to the next level.

A team from MIT has recently developed a double film coating that has the ability to transform infrared light into visible light.

While that may not outwardly seem like a huge gain for the energy technology sector, the development has the potential to vastly improve efforts in renewable. Essentially, this research could help increase the amount of light a solar cell could capture. By capturing and using protons below their normal bandgap and thus converting the typically unused infrared light into use visible light, researchers could see efficiency levels of solar panels rise.

The researchers went about this development by placing two films on top of a plate of glass. The bottom film was comprised by using a type of quantum dot, while the top layer was made up of an organic molecule.

END_OF_DOCUMENT_TOKEN_TO_BE_REPLACED

The Rise of Quantum Dots

The technology behind Edison’s incandescent blub may be a thing of the past, but the warm, gentle glow that it produced may be making its way back into your living room.

But we’re not scrapping the advancements in LEDs and regressing to old technology to do this. Instead, we’re turning our attention to quantum dots—the tiny crystal-like particles that are 10,000 times smaller than the width of human hair.

And the dots’ applications do not end simply at bulbs. These tiny bursts of light are expected to impact displays, solar cells, and cancer imaging equipment as well.