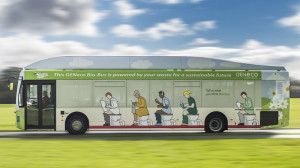 While this concept may be new in Britian, countries such as Norway, Germany and Sweden have all used or are using this technology.

The developer of the bus, GENeco, is an organization that looks for sustainable solutions.

ECS is also looking to revolutionize the way we look at poo. See what we’re working on in collaboration with the Bill & Melinda Gates Foundation and connect with us to get involved in the conversation!