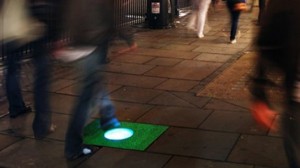 Collecting this energy is enough to power lights and other small devices for minutes at a time from a mere one hundred or so footfalls.
Credit: Pavegen

When we look at the kinetic energy that people produce from things such as footfalls or climbing steps, it just makes sense that we begin to move toward harnessing energy from human activity.

That is the mantra of the company Pavegen – the developer of power-generating systems for pavements, football fields, and even school corridors.

The technology for innovations such as this already exists, with the piezoelectric effect dating back more that 130 years.

Now, we have the ability to place these piezoelectric devices in unlikely places. When Pavegen applied this technology to a football field, they were able to produce up to 7 watts of energy with each step.

This tactic would be most efficient in high traffic areas, where it has the ability to produce enough energy to supply the demand.

“It’s not only a way of inspiring future generation into energy savings, but it shows we need different mixes of energy,” CEO of Pavegen Lawrence Kemball-Cook told CNN as part of the Transformed Tomorrow series. “Some people walk 40,000 steps a day, so there’s a lot of potential in those wasted footsteps.

Pavegen plans to be a fully scalable produce of renewable energy.

To learn more about the future of renewable resources, make sure to attend the ECS Conference on Electrochemical Energy Conversion & Storage with SOFC-XIV in Glasgow, where some of the brightest minds in science will discuss all aspects of research, development, and engineering of solid oxide fuel cells, batteries, and low-temperature fuel cells, electrolyzers, and redox flow cells.