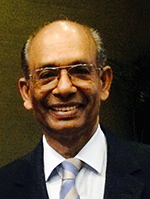 K.M. Abraham has been a member of The Electrochemical Society since 1979. He served as the Chair of the Battery Division and on the Board of Directors of the Society from 2006 to 2008. He also served as a member of the executive committee, treasurer, secretary and vice chair of the ECS Battery Division. K.M’s other service to the Society included Chair, Vice Chair, Secretary and Treasurer of the Boston Local Section from 1983-1987. He organized or co-organized many symposia on lithium battery materials and processes in Electrochemical Society meetings, and edited many symposium proceeding volumes. He published more than 95 papers in the Society journals and proceeding volumes.

K. M. Abraham is the principal of E-KEM Sciences, a battery consulting company in Needham, Massachusetts and a Professor at the Center for Renewable Energy Technology (NUCRET), Northeastern University, Boston, Massachusetts. He was previously President of Covalent Associates, Inc, Woburn, Massachusetts, and Senior Scientist, Group Leader, Vice President and Director of Battery Research and Development at EIC Laboratories, Inc., Norwood, Massachusetts. The company Modular Energy Devices he co-founded was acquired by EnerSys, the biggest Lead-acid battery company in the world.

K.M. has 40 years of experience in lithium battery research and development with emphasis on rechargeable Lithium and Li-ion batteries. He, along with his colleagues at EIC Laboratories in Norwood, Massachusetts, has made many pioneering contributions to advance primary and secondary lithium batteries. These include the early demonstration of practical rechargeable lithium batteries with long cycle life of several hundred cycles, the development of highly conductive gel polymer electrolytes and those supported on micro-porous polymer membranes that form the basis of commercial lithium-ion polymer batteries, introduction of the concept of redox shuttle reagents for overcharge protection of rechargeable Lithium and Li-ion batteries, initial studies on the rechargeable Lithium-polysulfide batteries, and the invention of the ultrahigh energy density non-aqueous lithium-air battery.

Other contributions include studies of the key role of micro porous polymer separators on the performance and safety of Li-ion batteries, structures and ion-transport properties of non-aqueous liquid and gel polymer electrolytes, research leading to improved understanding of the chemistry and safety of commercially available primary lithium batteries, development of moderate temperature rechargeable Sodium batteries with sodium polysulfide cathodes in organic electrolytes, intercalation cathodes in organic electrolytes, and metal sulfide cathodes in molten NaAlCl4, and the development of a general theory based on the hard-soft acid-base concept to explain oxygen reduction reactions in the non-aqueous Li-air battery . Most of these contributions were originally published in ECS journals.

K.M. has published more than 200 papers in journals, meeting proceeding volumes and book chapters, and authored 15 U.S. patents. He received a number of awards for his work including the Battery Research Award of The Electrochemical Society (1995), The National Aeronautics and Space Administration Group Achievement Award for the Rechargeable Battery Team (1995), Two NASA Certificates of Merit for invention (1983 and 1997) , and election as Fellow of The Electrochemical Society and Fellow of The Royal Society of Chemistry.