In its first “Science for Solving Society’s Problems Challenge,” ECS partnered with the Bill & Melinda Gates Foundation to leverage the brainpower of the many scientists in electrochemistry and solid state science and technology that regularly attend ECS meetings. The four grantees were identified during a multi-day workshop at the Electrochemical Energy and Water Summit in Mexico held October 2014.

Over 100 researchers were guided through a brainstorming and working group session with the theme of improving access to clean water and sanitation in developing countries. This brainstorm created a roadmap for applying electrochemical processes to technical gaps in existing projects.

Brandy Salmon, Ph.D., Senior Innovation Advisor from RTI International facilitated the brainstorming session. “The idea was to inspire researchers to consider the many ways electrochemistry can be applied to solve issues of global significance,” explains Salmon. “ECS provided a lab for collaboration that generated new ideas and partnerships.”

Ideas suggested ran the gamut from turning urine to hydrogen power and using microorganisms that harvest energy from marine sediments to looking at molecular slip as part of making waste pipes more efficient. The format provided a unique opportunity for researchers to generate potential solutions and then almost immediately start testing them.

Into the “shark tank”

After the brainstorm session, researchers had two days to develop a one-page pitch to compete for $210,000 of funding. Thirty finalists were selected from the 47 proposals submitted by the end of the second day. Those 30 were given five minutes each in the “Shark Tank” to present their ideas to a panel of judges followed by five minutes of questions.

The funding review panel scored proposals for innovation, collaboration, mission and capacity. The final deliberation and selection concluded the next day.

This innovative method for motivating scientists, gathering their proposals, and selecting winners, all in the space of 5 days, is unprecedented! (Email us to discuss future partnerships.)

Initially, four winners were selected, but due to the strength of the presentations, three more participants were awarded grants in 2015, making the grand total awarded $360,000!

In-situ Electrochemical Generation of the Fenton Reagent for Wastewater Treatment
Disinfection: Study the electro-Fenton approach using activated carbon to efficiently oxidize most of the organic and biological materials present in sanitary wastewater so that recycling of the wastewater might be possible. Learn more about Dr. Godinez and his work.

More Than MERe Microbes: Microbial electrochemical reactors for water reuse in Africa
Chemical Conversion: Develop microbial electrochemical reactors that harvest energy from human waste substrates using bioanodes engineered to process the waste into biofuels while simultaneously cleaning water for reuse. The microbial catalysts will be selected for their efficiency at processing the wastes, but also for their versatility to process other residential and agricultural waste substrates. This will provide an affordable, easy to operate system for the decentralized processing of a wide range of wastes for improved sanitation, water reuse, and energy independence. Learn more about Dr. Reguera and her work.

powerPAD
Monitoring and Measurement: Develop a non-toxic portable source of power for water measuring and monitoring systems, which will not require recycling facilities. Using inexpensive materials such as paper, nanoporous carbon electrodes and organic redox species, the team will strive to create a biodegradable and even compostable power source. The project is a collaboration among Neus Sabaté, Juan Pablo Esquivel, and Erik Kjeang from the Simon Fraser University in Canada. Learn more about Dr. Sabaté and her work.

A Fully Cardboard Based Microbial Fuel Cell
Energy Generation: Dr. Harnisch’s project proposes to develop a fully cardboard based, low-cost, high-performance, ready-to-use, sustainable microbial fuel cell which could clean wastewater while generating clean water and electric energy. The core of the microbial fuel cell is electrodes produced form corrugated cardboard via a simple carbonization procedure. The project will develop corrugated cardboard electrodes to be used as anode and cathode material which could be implemented in existing infrastructure. Learn more about Dr. Harnisch and his work.

Tri-Generation of Heat, Power, and Potable Water from Waste
Dewatering: Dr. Wachsman’s project will demonstrate a highly-efficient, low-cost solid oxide fuel cell (SOFC) for the co-generation of high quality heat for dewatering and drying processes, electric power and potable water using waste-produced biogas. The technology will be based on high-power-density low-temperature SOFCs, but they will be optimized for heat production rather than electric power. The SOFC stack will use proprietary all-ceramic anodes, which are both carbon and sulfur tolerant at lower temperatures to allow for thermal cycling and long-term operation without fuel contaminant induced degradation issues, such as sulfur poisoning. The project will be a collaboration among Eric Wachsman, Stephanie Lansing and Redox Power Systems, a company formed to commercialize Dr. Wachsman’s SOFC technology. Learn more about Dr. Wachsman and his work. 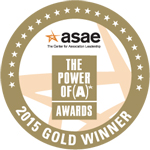 ASAE’s Power of A (association) Awards, the industry’s highest honor, recognize the association community’s valuable contributions on the local, national and global level. The Power of A Awards reward outstanding accomplishments of associations and industry professionals for their efforts to enrich lives, create a competitive workforce, prepare society for the future, drive innovation and make a better world. The Electrochemical Society earned a 2015 ASAE Power of A Gold Award for its Science for Solving Society’s Problems Challenge.

ECS is seeking new partners to find electrochemical solutions to issues in energy, climate, water and health. For more information, or to discuss partnering on the next Science for Solving Society’s Problem Challenge, please contact development@electrochem.org.