Home / About ECS / About the Science / Energy Sources

The energy sources that have changed our world

From primary cells to novel materials, the ability to generate power with energy sources such as batteries has changed our everyday world. 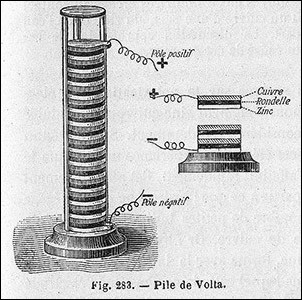 The voltaic pile was the first electric battery that could continuously provide electric current.

A world without batteries

Imagine a world without batteries! A teenager walks outside wearing headphones, tethered to home by a lengthy extension cord. An old man winds his pacemaker like a pocket watch. With no storage batteries to equalize power demands, air conditioners overwhelm the city’s electrical grid. In thousands of ways, large and small, batteries have changed our daily lives.

Batteries are divided into two main types: primary cells, which generate power but cannot be recharged, and secondary cells or storage batteries. (Strictly speaking, a battery is a group of cells connected together, but the term is frequently used for a single cell as well.) Dry cells and button cells are primary cell batteries commonly used today.

Batteries today are convenient, portable, and widely used, but the earliest batteries were not. They were wet: usually open glass containers with acid electrolytes that needed frequent replacement. They required specialized handling and were generally used in research laboratories, in electroplating workshops, and by telegraph companies.

The first dry cell, patented by Carl Gassner in 1886, was based on a battery invented in France by Georges Leclanché in 1866. Although Leclanché’s cell used a liquid electrolyte, Gassner’s instead used a paste-like electrolyte made of ammonium chloride and zinc chloride. the anode, a zinc cup, enclosed the paste and a cathode of manganese dioxide and carbon powder surrounding a carbon rod. Today’s dry cell operates in much of the same way.

Although early commercial dry cells could not generate much power, they were strong enough to run the electric bell systems appearing in homes, offices, and hotels. In 1900 the first flashlights increased demand for batteries. Twenty years later, battery-powered home radio receivers set off a new wave of innovation in dry cells. In the 1960s alkaline cells (zinc-carbon cells with a potassium hydroxide electrolyte) became available. Although relatively expensive, these are popular because they produce a more constant voltage and last longer than Leclanché-type dry cells do.

Another familiar form of primary cell is the button cell. As radio operators in the Allied forces found during the Second World War, zinc-carbon batteries do not last long in hot climates. The American inventor Samuel Ruben solved this problem by inventing the mercury button cell, a tiny battery that produced a constant voltage even in the tropics. After the war, mercury button cells found a new market in consumer products lik hearing aids, implanted cardiac pacemakers, and cameras. As the environmental dangers of mercury have become better known, manufacturers have replaced mercury with other substances, such as silver oxide, lithium, and even air.

New materials have expanded the uses of batteries. Electrochemists had long predicted that lithium would be a good materials to use as an anode in batteries because of its light weight, good conductivity, and position in the electromotive series. But because lithium is so reactive, designers took many years to develop usable electrolytes. Lithium batteries now come in many sizes and are used in applications that range from digital watches to systems for standby and emergency power needs.

Air has a different advantage: a cathode using air theoretically has an infinite life. Laboratory models of air batteries appeared as early as the late nineteenth century. In the 1930s large zinc-air batteries were put in service to power railroad signal devices at locations remote from the electric power grid. Commercially successful zinc-air button batteries first appeared in the 1970s.