Home / About ECS / About the Science / Biology and Medicine

Electrochemical energy is produced in every cell of every plant and animal. An animal’s nervous system sends its signals by means of electrochemical reactions.

Virtually every electrochemical process and its technological application has a role in modern medicine.

The power of electricity in living beings

In the movie Frankenstein, the power of electricity turns a collection of dead body parts into a living monster. Although this use of electricity is still fictional, electrochemical forces are essential to making our bodies function. Understanding those forces has helped the development of medicine immensely. 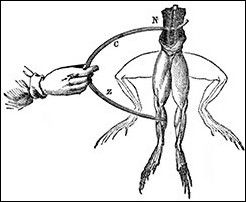 Galvani conducted experiments on frogs by connecting the nerve and the leg muscle with a metal arc, which caused the frog to kick.

In 1730 Stephen Gray gave a schoolboy a charge of static electricity in what was probably the first electrical experiment performed on an animal of any kind. During the next fifty years other researchers discovered that the touch of an electrically charged rod could cause the muscles of dead animals to contract. These experiments did not prove that electricity controlled muscles, but they did convince Luigi Galvani in the late eighteenth century that the question deserved further research.

Galvani set out to show that “animal electricity” did indeed exist. By 1791 he had succeeded in making dead frogs kick by connecting a frog leg nerve and muscle with a metal arc — without adding any electricity. The reasons for this motion remained uncertain until the 1840s, when sensitive new instruments allowed Emil du Bois-Reymond to show that electrical currents indeed flowed though both muscles and nerves. Changes in the currents’ intensity or direction caused the muscles to contract.

In the late nineteenth century, some doctors began to experiment on living patients. By carefully controlling the location of their electrodes, scientists learned how to make individual muscle fibers contract. This enabled them to draw more detailed maps of muscular system that had previous been available.

ATP and the energy of life

The chemistry behind these effects is understood in much greater detail today. According to the membrane theory of nerve excitation, originally proposed by Julius Bernstein in 1902, the membranes of neurons (nerve cells) can become electrically polarized by blocking or transmitting particular kinds of ions. As David Nachmansohn first demonstrated in 1938, this polarization travels along the nerve to the end, where it triggers the release of a chemical called acetylcholine. That chemical causes adjacent neurons to become polarized too, sending the impulse toward its destination, whether a muscle, another nerve, or some other organ. When the nerve signal reaches a muscle, it causes a chain of chemical reactions that results in the breakdown of a molecule called adenosine triphosphate (ATP). Electrochemical energy is released when the ATP molecule is broken apart.

ATP is the basic source of energy for all living beings. It is made in the Krebs cycle, a series of cellular chemical reactions discovered by Hans Krebs in the 1930s. Each cell of a plant or animal uses glucose (a kind of sugar) to produce a difference in electrical charge across a membrane. This difference then drives the machinery that makes ATP. Plans actually produce glucose through another electrochemical process, photosynthesis, in which the energy of sunlight causes chlorophyll molecules to release electrons, setting off a series of reactions culminating in the production of ATP.

Electrotherapy: Shocks to the system

During the eighteenth and early nineteenth centuries, electricity was all the rage. Doctors, scientists, and quacks — not always easily distinguished from one another — used electrochemical shocks to treat almost every malady imaginable. They succeeded most often when treating certain kinds of paralysis by stimulating the muscles, and by the mid-nineteenth century Guillaume Benjamin Duchenne de Boulogne had systematized this technique. Physical therapists today still use electrotherapy for paralysis and other physical problems.

The most important muscle treated with electricity is the heart. Normally, regular pulses of electricity keep it beating at a constant pace. If something goes wrong with the natural electrical pulse, artificial pacemakers, available since the 1950s, can keep a patient’s heart beating steadily. Emergency treatment for irregular heartbeat can be delivered by a cardioverter or defibrillator. In some cases a single jolt of electricity through the chest is enough to restore normal rhythms.

While electrotherapy, heart packing, and cardioversion all use electricity to stimulate muscles, electroconvulsion (electroshock treatment) delivers it to the brain. Some psychiatrists still use this treatment, which was first used in Italy in 1938, to treat depression and other mental illness. It is extremely controversial, for it can cause brain damage and sometimes even death.

The destructive effect of passing an electrical current though human tissue (electrolysis) also has therapeutic uses. In the nineteenth century surgery was a very dangerous and painful affair. Rather than surgically removing a tumor, a physician could use electrolysis — which was unlikely to result in death from infection or shock — to slow or even stop its growth. With improvements in surgical technique, electrolysis has ceased to be a common treatment for cancer, but it is still frequently used (under the name of electrocautery) to stop the bleeding of small blood vessels. Dermatologists also continue to use it to remove warts, moles, and hair.

Besides treating health problems, electricity can also be used to detect them. Recording devices now turn the body’s natural electrical activity into diagrams that doctors then use to analyze medical problems. Physicians now diagnose heart abnormalities with electrocardiograms (ECGs), brain disturbance with electroencephalograms (EEGs), and loss of nerve function with electromyograms (EMGs).

Electrochemical technology at work in the body

This century’s technological advances have brought electrochemistry into the body in a new way. In the 1950s heart patients pushed their pacemakers around on carts. Now surgeons can put pacemakers inside the patient’s chest. Today transistors and microchips reduce the size of implantable electronic devices, long-lasting batteries power them, and inert materials like titanium and non-crystalline metals resist electrochemical reactions inside the body.

Semiconductor technology has become commonplace in medicine. Cochlear implants use computer technology to stimulate the auditory nerve directly, enabling some completely deaf people to hear. Computers help doctors analyze complex numerical data, such as the readout from an EEG. In a CAT scan a computer manipulates an X-ray image to enable doctors to see soft tissue like the brain. In medicine, as in so many areas, electrochemistry has revolutionized our lives.