Home / About ECS / About the Science / Semiconductors Shaping Society 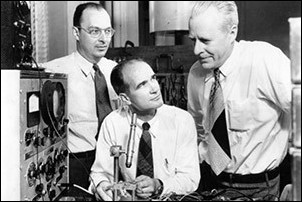 In 1956, Brattain, Bardeen, and Shockley won the Nobel Prize in physics.

Without transistors and integrated circuits made of semiconductors, much of modern life would be very different. No hand-held electronic games would entertain children for hours. No bar-code readers would speed checkout lines and compile inventories at the same time. And no computers would handle tasks at work and home, nor would microprocessors control the operations of cars, planes, and space vehicles.

The revolution in electronics that made such wonders possible began in 1947. That year Walter H. Brattain, John Bardeen, and William B. Shockley, working together at Bell Labs, made the first transistor. Their research led to a smaller, lighter, and more durable replacement for the vacuum tube, an innovation widely adopted in the 1920s. Vacuum tubes could amplify electrical signals in radios and record players and serve as the on-off switch necessary for the binary code employed in computers. The transistor, eventually more efficient and much smaller, could do this and more.

Transistors, and many other electronic devices, are made of semiconductors — materials that conduct electricity only weakly under certain conditions. Radar technology, developed during World War II, used tow semiconductors, germanium and silicon, to detect short-wave radio signals. Although the theory on which the Bell Labs scientists based their work was largely the product of the 1920s and 1930s, the wartime experience of purifying these elements and exploring their electronic properties brought the three scientists to the threshold of their invention.

The first transistor was a point-contact transistor, in which contact was made between a piece of germanium and three wires. Shortly thereafter Shockley invented the more reliable junction transistor, a “sandwich” of two types of germanium (N and P) produced by adding small amount of impurities. Silicon became the preferred material for making transistors; its ability to form a dioxide layer easily also made today’s integrated circuits possible.

An integrated circuit, or IC, contains many transistors and other devices on a single “chip” of silicon. Jack S. Kilby of Texas Instruments made the first IC in 1958. In 1959 Fairchild’s Jean Hoerni invented the planar process, which Robert Noyce, another Fairchild scientist, used to produce a chip that, unlike Kilby’s, did not require any external wiring: the circuit is printed in the dioxide layer. In 1960 Dawon Kahng and Martin Atalla of Bell Labs created the first metal oxide semiconductor (MOS), or field effect, transistor, the kind of transistor most used today. Like planar processing and integrated circuits, MOS transistors transformed the semiconductor electronics industry. In 1965 Gordon Moore, a co-founder of both Fairchild and Intel, predicted that the number of transistors that would fit on a given area of silicon would double every year. In 1975 he modified this to every two years — still an astonishing prediction that has thus far proved accurate.

From photovoltaic cells to semiconductor lasers

In effects first observed in the 1870s, some semiconductors respond to light by producing an electric current (the photovoltaic effect) or becoming able to conduct current (the photoelectric effect). Photovoltaic (solar) cells are used to provide electrical power to remote locations, on satellites, and, in combination with storage batteries, for some outdoor lighting.

Still other semiconductors give off light when they gain electrons. Gallium arsenide and aluminum phosphate, which were developed in the 1960s, are made into the light-emitting diodes (LEDs) used as displays in digital clocks, microwave ovens, and countless other electronic devices. Those same materials can be shaped to form a reflecting cavity that amplifies and directs the light it produces, creating a semiconductor laser. Semiconductor lasers are often paired with photoelectric cells in automatic doors, burglar alarms, bar-code readers, and fiber-optic communications devices.