Home / About ECS / About the Science / Battery and Fuel Cell Technology 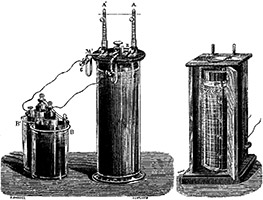 A secondary cell, or storage battery, can function as either a voltaic or an electrolytic cell. When its electrodes are connected to a device that uses electricity, it functions like any other battery. When a current is fed through it, the electrochemical reactions are reversed, replenishing the battery’s strength.

In 1866 the Frenchman Gaston Planté discovered the combination still widely used today for storage batteries: electrodes of rough lead and lead dioxide immersed in a solution of sulfuric acid.

With the coming of large generators in the 1880s, storage batteries became tools for industrial and consumer use. In power systems batteries were charged by generators during the daylight hours and discharged at night when people turned on their lights. In trolley systems they equalized the uneven demand for power caused by starting and stopping in traffic. Lead-acid storage batteries began to appear nearly everywhere.

The most familiar use today for lead-acid storage batteries is to start car engines. Early automobiles were started by hand-cranking the engine. When Charles F. Kettering invented the electric starter in 1911, his boss — who had recently broken his arm while starting his car — was eager to finance this new invention. Kettering’s device was powered by a rechargeable lead-acid battery. Demand for batteries shot up overnight: Kettering’s first order for ten thousand batteries from the Electric Storage Battery Company of Philadelphia was greeted in disbelief. 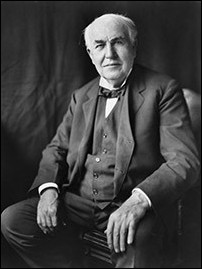 Thomas Edison, long-time ECS member, influenced the world through the creation of devices such as the phonograph, motion picture camera, and light bulb.

The small rechargeable batteries that power portable telephones, shavers, and other devices are descendants of the alkaline rechargeables invented independently in 1901 by Thomas Edison in the United States and Waldemar Jungner in Sweden. The electrodes were nickel oxide and cadminum or iron powders contained in pockets or tubes of nickel-plated steel. This made the batteries scarcely lighter, and more expensive, than conventional lead-acid arrangements. Lightweight alkaline rechargeables did not become available until the Second World War, when the German chemical combine IG Farben used a process called sintering to clump the powders into a solid, thus making the supports unnecessary.

Improved nickel-cadmium (NiCad) batteries are largely responsible for making computers, video cameras, and other products as portable as they are today. But the search continues for new designs in lightweight rechargables. Consumers want portable devices to weight less and operate for longer periods away from an electric socket.

Disposable problems associated with the toxic cadmium have also spurred innovation. New rechargeable batteries for portable devices include metal-hydride batteries, in which the cadmium is replaced with hydrogen absorbed in a metal alloy, and rechargeable variants of the zinc-air and lithium cells.

For large-scale energy applications to replace the lead-acid storage battery, scientists have turned again to lithium and sodium for their high reactivity and their relative abundance. The Electrolytes needed for large-scale lithium and sodium batteries only work at high temperatures, however. Developing other high-energy battery systems remains an objective for many research and development teams.

Fuel cells: An alternative to combustion

As far back as 1839, the English scientist William Grove had the idea that the reactants of a battery could be gases fed into it from external tanks, For most of their history, fuel cells existed only as laboratory curiosities. Then in the 1950s in the United States, Francis T. Bacon developed the first operational multikilowatt cell, with an output of five kilowatts. The first major application of fuel cells was in the Gemini and Apollo space flights in the 1960s.

Fuel cells have also been considered as power sources for vehicles and for remote and back-up power stations. In the fuel cell’s basic chemical reactions, the electrons transferred from atoms of fuel (e.g. hydrogen) to oxygen atoms are immediately available as electrical energy through the external circuit that connects the cell’s electrodes. The process is much cleaner and more efficient than igniting fuel in an internal combustion engine or burning it to heat water for a steam engine and using that energy to turn electric generators.