Home / About ECS / About the Science / Birth of Electrochemistry

History of electrochemistry: From Volta to Faraday

The history of electrochemistry is filled with major advances in understanding and technology that helped define both industrial production and daily life in the twenty-first century. 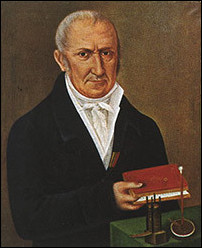 The story of electrochemistry begins with Alessandro Volta, who announced his invention of the voltaic pile, the first modern electrical battery, in 1800. The pile caught the imagination of even the ruler of France, Napoleon Bonaparte, who went so far as to serve as Volta’s lab assistant in November of 1801. As Volta described his recent discoveries concerning electricity to the French National Institute, the delighted Napoleon demonstrated them on a voltaic pile.

Volta’s predecessors, including Benjamin Franklin, had studied what is now called static electricity. The voltaic pile produced a continuous current and thus opened two new areas of study: the chemical production of electricity and the effects of electricity on chemicals.

Volta had built the voltaic pile to challenge Luigi Galvani’s claim to have demonstrated that animals produce electricity. According to Volta, Glavani’s results came from his use of two dissimilar metals connected by a moist conductor (a frog’s leg). Volta reproduced this configuration in his new invention, which consisted of pairs of zinc and silver disks connected by brine-soaked cardboard.

In the course of explaining his “contact” theory of electricity, Volta published one of the earliest electromotive series, which ranked metals and other substances according to the strength of their electrical effects. He placed those materials farthest apart that, when placed in contact, produced the strongest effects. Volta’s ranking bore a striking resemblance to the affinity tables that chemists had been organizing for years, tables that showed which substances would displace others in compounds. A few years later Humphry Davy would argue in his electrical theory of chemical affinities that this similarity was no coincidence. 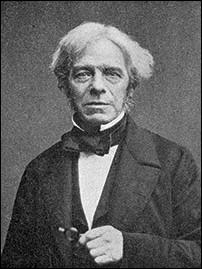 Michael Faraday, considered to be one of the greatest scientists in history.

Sir Humphry Davy of the Royal Institution in London was one of the most important experimenters with the new voltaic battery, He realized that the production of electricity by the voltaic pile depended on the occurrence of chemical reactions, not just on the contact of different kinds of metals, as Volta had thought. Davy used current supplied by the pile to separate compounds into their parts, discovering several new elements. His experiments led him to propose in 1806 an electrical theory of chemical affinity: since electrical current overcame the normal force that held elements together in compounds, he argued, this force must be electrical in nature.

Davy’s student and successor, Michael Faraday, pursued the relationship between electricity and magnetism. In the course of his research he invented the first electric motor (in 1821) and the first dynamo (in 1831). Faraday’s chief electrochemical achievement was to show that “magneto-electricity” had the same chemical effects as electricity generated in other ways. His two laws of electrochemistry, published in 1834, predict how much product results from passing a certain amount of current though a chemical compound or its solution, a process that he named “electrolysis.” These laws are still fundamental to industrial electrolytic production of metals and other chemicals.