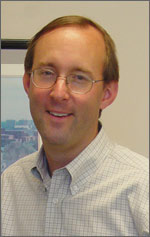 Dr. Allendorf has worked extensively in the field of high temperature chemistry, with an emphasis on chemical vapor deposition processes (CVD). His work includes investigations for growth and the underlying chemistry responsible for precursor decomposition for the CVD of tin oxide, indium oxide, boron nitride, silicon carbide, and titanium compounds. As a result of this work, he developed an extensive online database of gas-phase thermochemistry relevant to high-temperature processes using ab initio quantum-chemistry methods. Currently, he is also using thermodynamic analyses to identify chemical systems for solar production of hydrogen. Dr. Allendorf is a member of the Microfluidics Department at Sandia-CA, where he is developing new nanoporous materials for separations and sensing applications. Other recent activities in his laboratory include: thermochemical and transport modeling of high-temperature refractory corrosion; mechanistic studies of heterogeneous catalysis processes used to make ethylene and synthesis gas; and development of models to predict the performance of metal-insulator-semiconductor sensors in complex gas mixtures.

Dr. Allendorf’s activities with ECS include service as secretary/treasurer, junior vice-chair, senior vice-chair, and chair of the High Temperature Materials Division (1994-99; ex officio member of the ECS Board of Directors 1997-99); and member of the Publication (1992-95), Technical Affairs (1994-97), Finance (1999-01), and Ways and Means (2000) committees. He served as an organizer for several major ECS symposia, including the International Symposium on Chemical Vapor Deposition. In addition, he is a member of the editorial board for the journal Chemical Vapor Deposition. Dr. Allendorf is the author of over 90 publications, the editor of seven ECS proceedings volumes, and has presented work at nearly 100 technical conferences. He is the recipient of a Sandia Award for Leadership and the E. Karl Bastress Award (given to outstanding research staff at Sandia’s Combustion Research Facility) for coupling fundamental research to the needs of industry.