Home / About ECS / History of ECS / James A. Amick 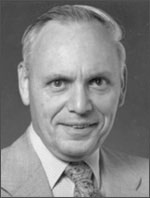 James Albert Amick was born in Lawrence, Massachusetts on February 18, 1928. He received his A.B. degree in 1949 from Princeton University. After spending a year at Brookhaven National Laboratories, he returned to Princeton for his M.A. (1951) and Ph.D. (1952) in physical chemistry. He held the Ethyl Corp. Fellowship 1951-52.

After a post-doctoral year at Princeton, Dr. Amick joined RCA Laboratories in Princeton, NJ where he worked on a wide variety of solid-state-related programs. From 1956 to 1957, he spent several months at the Zurich, Switzerland RCA laboratories doing research on Electrofax, an electrophotographic process. After returning to the Princeton Labs in 1957, he conducted pioneering research on the stabilization of semiconductor surfaces and on epitaxial deposition of gallium arsenide films by chemical vapor deposition. In 1965, he became Group Leader in Process Research on doped oxide diffusion sources and tungsten metallization of silicon devices. In 1971, he transferred to the Solid State Division of RCA as Manager of Materials and Processes Laboratory.

In 1976, Dr. Amick joined the staff of Exxon Corporate Research Laboratories as Area Manager for Photovoltaic Research in support of Solar Power Corp., a Exxon subsidiary. In 1987, he joined Mobil Solar Energy Corp. in Billerica, MA as head of Solar Cell Processing R&D Activity. He was successful in developing a new simplified and more robust technology for fabricating high efficiency polycrystalline silicon solar cells. After retiring in 1993, he served as a volunteer and board member for the Princeton Unit of Recording for the Blind and Dyslexic and for the Trenton After School Program.

Dr. Amick published work included chapters in two books, more than 45 papers, and 10 patents on various aspects of semiconductor processing and photovoltaics. From 1963 to 1970, he was editor or co-editor of several issues of RCA Review dealing with microelectronics processing. He presented numerous lectures on solid state and solar energy topics.

Dr. Amick became an active member of The Electrochemical Society in 1964. He served the Dielectrics and Insulation Division (now Dielectric Science and Technology Division) as Treasurer, Vice-Chairman, and Chairman (1980-82). He was Chairman of the Honorary Membership Subcommittee of the Honors and Awards Committee (1980-83). He also served as head of an Ad-Hoc Publicity Committee and a member of the Corporate Membership Committee. He was elected Secretary of the Society for the term 1984-1988. In 1991, he was elected Vice-President of the Society and President for the term 1994-1995.

In 1967, Dr. Amick was co-recipient of the prestigious David Sarnoff Team Award in Science. He also received three RCA Labs. achievement awards. He was a Fellow of the American Institute of Chemists, and member of ACS, AAAS, and Sigma Xi. He was a member of an advisory committee to NASA Huntsville concerning the space shuttle. He also served twice on review panels for DOE-sponsored photovoltaics research. He was listed in “Who’s Who in Frontiers of Science and Technology” and in “Leaders in American Science.”