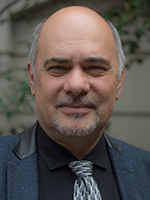 Plamen Atanassov received his MS from the University of Sofia in chemical physics and PhD from the Bulgarian Academy of Sciences in physical chemistry. His career started as a member of the technical staff at the central laboratory of Electrochemical Power Sources in metal-air batteries, and a visiting scientist at the Frumkin’s Institute of Electrochemistry, specializing in bio-electrochemistry. Atanassov moved to the U.S. in 1992 and joined the research faculty at the University of New Mexico (UNM). During the 1990s he was involved in the development of electrochemical biosensors for biomedical, environmental, food, and defense applications.

In 1999, Atanassov joined Superior MicroPowders, where he was a project leader in fuel cell electrocatalysts development, and introduced spray pyrolysis for catalyst synthesis on an industrial scale. He returned to UNM in 2000 as tenure-track faculty member. In 2007, he founded the UNM Center for Emerging Energy Technologies. Currently, he is Distinguished Professor of Chemical & Biological Engineering and Chemistry & Biology. Since 2015, he has been the director of the UNM Center for Micro-Engineered Materials.

Atanassov was an ECS Science For Solving Society’s Problems grantee. Learn about his work.