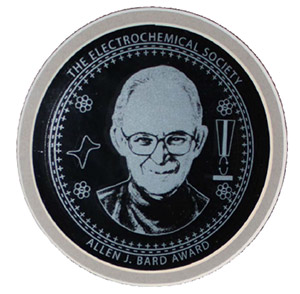 The recipient will be distinguished for paradigm shifting contributions in the fields of electrochemical science and recognized for exceptionally creative experimental or theoretical studies that have opened new directions in electroanalytical chemistry or electrocatalysis. The recipient does not need to be a member of The Electrochemical Society.

The award consists of a plaque containing a glassy carbon medallion, the sum of US $7,500, complimentary meeting registration for award recipient and companion, a dinner held in recipient’s honor during the designated meeting, and Life Membership in The Society. The recipient will receive the award in person at the designated meeting of the Society and deliver a general address to the Society on a subject related to the contributions for which the award is being presented.

Allen J. Bard is the Norman Hackerman-Welch Regents Chair in Chemistry and the Director of the Center for Electrochemistry at The University of Texas at Austin. A well-published expert in electrochemistry, he is responsible for over 850 peer-reviewed research papers, 75 publications, and three books: Chemical Equilibrium, Electrochemical Methods – Fundamentals and Applications, and Integrated Chemical Systems: A Chemical Approach to Nanotechnology.