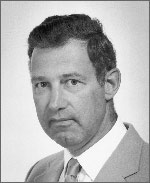 Gerard M. Blom is a Research Department Head at Philip Research in Briarcliff Manor, New York, responsible for lighting and projection display systems. His research interests have included liquid-phase epitaxy (LPE), vapor-phase epitaxy (VPE), and Czochralski growth of III-V compound semiconductors, research on light emitting diodes (LEDs) and lasers, the liquid and solid phase diagrams of those compounds, their defect characterization such as point defect concentration calculations and transmission electron microscopy (TEM). He was involved in and responsible for digital optical recording disk research and fabrication. Subsequently, he was in charge of materials characterization and materials engineering, the latter mainly focused on low and high pressure discharge lamps.

Born in Utrecht, The Netherlands, Blom earned his B.Sc. degree in 1962, his M.S. degree in 1965, and his Ph.D. In 1969 in Material Science, all at the University of Utrecht. He joint the IBM T. J. Watson Research Center as a post doctoral fellow in 1969 and Philips Research in 1971. At IBM he did research on LPE of InP and InP-based ternary compounds for the development of high efficiency LEDs and lasers. In the course of that work he investigated several III-V ternary phase diagrams. At Philips Research he studied Czochralski growth and several epitaxial crystal growth methods for the fabrication of high efficient GaP LEDs and GaAlAs lasers. He investigated both experimental and theoretical aspects of these materials. His work on TEM addressed the dislocation structure in III-V lasers as it related to laser life times. His research on materials for digital optical recording showed that surface tension and capillary pressure are the driving forces toward the equilibrium status, leaving a well-shaped hole in the Te-Se alloy films. He also worked on crystal growth of non-liner optical materials such as potassium titanyl phosphate. His recent research interests are in light valve based projection display systems, lighting systems, and electronics for lighting systems.

Dr. Blom’s activities in the Electrochemical Society include his memberships in the Electronics Division Executive Committee, Treasurer of this committee, member of several Electronic Division subcommittees, member of the ECS Finance Committee, Chairman of the Honors and Awards Committee of the Society, and member of the New Technology subcommittee. He was also an Associate Editor of the Journal since 1990 until his election as ECS Vice-President.