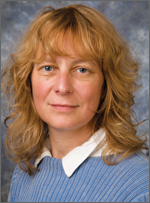 Christina Bock is a Senior Research Scientist at the National Research Council in Ottawa, Canada, where she is leading the research group on Electrocatalysis and Electrochemical Processes. She joined NRC, after graduating from the University of Calgary, in May 1997.

Her research focuses on electrocatalysis for waste water treatment, fuel cells, and electrochemical water splitting reactions. She is also conducting research on the lowering of NOx emissions using electrochemical reduction techniques. Much of her research work is devoted to the preparation of catalysts and electrode structures, as well as their characterization and incorporation into real devices. She has developed several novel approaches for the characterization and the determination of relevant performance properties of electrocatalysts. She has obtained a U.S. patent for her catalyst formulations, and was awarded the Lash Miller Award of the ECS Canadian Section in 2005.

She has authored and co-authored numerous original research articles in well-regarded journals, authored and co-authored five book chapters, and has written numerous reports for industrial collaborative projects. She is currently writing a textbook about methanol fuel cells. Her research at the NRC consists of a variety of projects that encompass both fundamental research work, including the guiding of graduate students in association with the University of Ottawa, and applied investigations for industrial collaborations. She has been working closely with Hydrogenics since 2005 and with Ballard and AFCC for the past two years.

Dr. Bock joined ECS in 1993 during her graduate studies in Canada, shortly after she had finished her BSc in Chemistry and Chemical Engineering in Switzerland. Since becoming a member, she has attended many meetings and has been actively involved with ECS at many levels. She has served on the Canadian Section Executive Committee (1998-2006), as Chair of the Canadian Section (2002-2003), on the Executive Committee of the Council of Sections (2000-2005 and as Chair in 2003-2004), on the ECS Board member (2003-2005), representative to the Individual Membership (2002-2003) and Education Committees (2004-2005), served as a member of the Ways and Means Committee (2004-2006), and on the Fuel Cell Coordinating Committee (2006-present).

Dr. Bock has organized and co-organized many symposia and takes part in Divisional Executive committee meetings. Her activities with ECS have given her a solid and broad understanding of the Society. She joined the Society as a student member because she realized the importance of presenting her research work and of receiving feedback and interacting with ECS members who are experts in the field of electrochemical science and technology. She is a proud member of ECS and has benefited from the wide diversity the Society provides, which stretches from fundamental to applied research, and importantly providing an opportunity for meeting and exchanging scientific information and ideas with researches from university, governmental institutions, and industry.