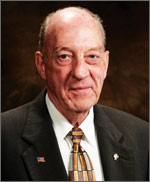 William (Bill) Brown holds the title of Distinguished Professor Emeritus since retiring from the University of Arkansas in 2008. During his tenure at the university he served as Head of the Department of Electrical Engineering, Associate Dean of Engineering for Research, and Director of the High Density Electronics Center (HiDEC), a world-class electronics packaging center that he established in 1991. Brown’s research has resulted in more than 350 scientific papers, 353 conference/workshop presentations, and 22 educational publications. In addition, he has co-authored and/or co-edited 4 textbooks and 4 book chapters and holds 15 U.S. patents. He has received honors for both his teaching and research. Dr. Brown received the Thomas D. Callinan Award from the ECS Dielectric Science and Technology Division in 1996 and was elected to Fellow status by the Society in 2002. He was elected to Fellow status by the IEEE in 2005.

While serving in these positions, Bill has been an ardent supporter of the Society’s efforts to disseminate technical information and expand the Society’s international activities. As a Society member, he has co-organized 28 symposia, including the well-regarded Silicon Nitride and Silicon Dioxide Thin Insulating Films, Low Temperature Electronics and High Temperature Superconductivity, Diamond Materials, and the III-V Nitride series. He has contributed a substantial number of papers to the Journal of The Electrochemical Society, the Letters journal, and ECS proceedings volumes.