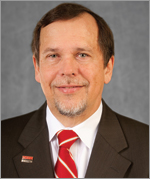 Peter Fedkiw is Professor of Chemical Engineering at North Carolina State University, Raleigh, NC. He received his BChE degree in 1974 from the University of Delaware and completed his PhD studies at the University of California, Berkeley, in 1978. He joined the NCSU faculty as an Assistant Professor immediately thereafter and was promoted to Associate and Full Professor in 1983 and 1989, respectively. He was appointed Associate Department Head of Chemical Engineering in 2000. In 1995, Dr. Fedkiw became a part-time Intergovernmental Personnel Act (IPA) employee of the Chemical Sciences Division, U.S. Army Research Office (ARO) in Research Triangle Park, NC. At ARO he formulates and manages basic research programs in the science and technology underpinning soldierportable advanced-energy-conversion systems. As an NCSU faculty member, he has directed the theses of 35 graduate students, the majority of which were PhD candidates.

Dr. Fedkiw’s research expertise is electrochemical engineering, and in his 23 year career at NCSU he has published in a variety of areas including theoretical studies of current-distribution problems and methods to analyze such; electrochemical-based mass-transfer separation processes; optimal control of electrochemical reactors; polymer electrolyte membrane reactors for electrosyntheses as well as fuel cells; electrodeposition of nanocrystalline metals and nanocrystalline composites; and, composite electrolytes for rechargeable lithium batteries, among
others. Dr. Fedkiw has published 73 peer-reviewed papers, and he has seven patents issued or pending. His students and he have presented nearly 100 papers at conferences, the majority of which have been ECS meetings. He has been a consultant to a variety of companies, and he sits on a number of government review and advisory panels.

Dr. Fedkiw has been a member of ECS since joining in 1975 as a student member. In addition to the Society, he is a member of the American Chemical Society, American Institute of Chemical Engineers (AIChE), American Association for the Advancement of Science, Materials Research Society, and Sigma Xi. He was vice-chairman and chairman for the AIChE Annual Meetings programming area in Electrochemical Fundamentals, and he represents the AIChE to the Working Party on Electrochemical Engineering of the European Federation of Chemical Engineers. He has been an active participant in ECS; among other symposia that he has chaired, he organized the highly successful General Student Poster Session at Society meetings from spring 1999 to fall 2001. He has been a member of the New Technology Subcommittee, Contributing Membership Committee, and the New Electrochemical Technology Award Committee of the IEEE Division. Dr. Fedkiw is currently serving his third appointment on the Education Committee, of which he is presently chair