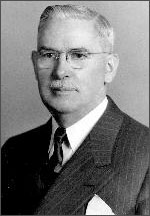 Alfred Lynn Ferguson was born on June 6, 1884 at Grass Lake, Michigan. His elementary education was received in a one-room rural school and the Grass Lake High School. He received a B.Pd. degree from Michigan State Normal College in 1904. From 1904 to 1907, he was Principal of the Northville Michigan High School. He continued his studies at the University of Michigan and obtained an A.B. degree in 1908; his M.A. in 1909 and his Ph.D. degree from Michigan in 1915. He became an Assistant in Chemistry at Michigan from 1911-1915. He was made Instructor in 1915; Assistant Professor of General and Physical Chemistry in 1921; Associate Professor in 1936; Professor in 1944; and Emeritus Professor in 1954. He taught electrochemistry at Michigan for forty seven years. Twenty three men received their Ph.D degree doing research in electrochemistry under his supervision. His principal fields of research were on electrochemical polarization and overvoltage, electrodeposition, activity and concentration, transport numbers, and boundary potentials. He published sixty one papers on his research and related subjects. He was a strong advocate of greater cooperation between industrial and academic research.