This is a special course covering the fundamental basis of ac electrical measurement and its application to modelling functional materials with a focus on gas sensors. Case studies are presented for both resistive and potentiometric type gas sensors, as well as mixed ionic-electronic conductors (MIECs). This course is designed for working engineers and scientists in industry, as well as senior undergraduate and graduate students, researchers in all disciplines of engineering, physics, and chemistry. 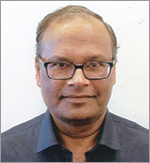 Sheikh A. Akbar is a Professor of Materials Science and Engineering and Founder of the National Science Foundation (NSF) Center for Industrial Sensors and Measurements (CISM) at The Ohio State University in Columbus. His recent work deals with synthesis-microstructure-property relations of ceramic bulk, thin-film and nano-heterostructures.

Akbar was the Chair of the 12th International Conference on Chemical Sensors (IMCS-12) held in 2008. This meeting was attended by 330 participants from more than 30 countries. His sensors received three (3) R&D 100 Awards as part of the 100 best inventions of 2007 and 2005 selected by R&D Magazine and 2005 NASA TGIR (turning goal into reality) award.

Akbar is the recipient of The Electrochemical Society’s 2012 Sensor Division Outstanding Achievement Award, the 2002 Tan Chin Tuan Fellow of Nanyang Technological University in Singapore, the 2001 Fulrath Award, and the 2002 W.E. Cramer Award of the American Ceramic Society. He was elected a Fellow of the American Ceramic Society in 2001 and a Fellow of The Electrochemical Society in 2018. He also received the 1993 B.F. Goodrich Collegiate Inventors Award for the development of a rugged and durable CO/H2 sensor—one of three national awards.

Akbar has co-edited two books on sensors. In 2003, he served as the Guest Editor for two special sections of the Journal of Materials Science: “Chemical Sensors for Pollution Monitoring and Control” and “Chemical and Bioceramics.” He was the Principal Editor of special issues entitled, “Nano-structured Ceramic Oxides: Challenges and Opportunities” and “Energy and Environment: Role of Advanced Materials,” published by the American Scientific Publisher in 2011 and 2014, respectively. He was also the Guest Editor of a special issue entitled “Sensing at the Nano-scale: Chemical and Biosensing,” published in 2012 in Sensors, and “Nano-hetero-structures for Chemical Sensing: Opportunities and Challenges” published in Frontiers in Materials in 2019.

Akbar was elected an Editor of Sensors and Actuators B; Chemical in 2018, a role he is continuing. He is also on the Editorial Boards of the Journal of Nanoengineering and Nanomanufacturing, Materials Focus, Sensors, Ceramics International, Journal of Nanomaterials, Sensor Letters, and Frontiers in Materials (Function Ceramics Chief Editor).

He has published more than 225 technical papers and holds eight patents with an h-index of 45. Akbar received the Mars G. Fontana Outstanding Teacher Award in Materials Science and Engineering for both 2016 and 2017.