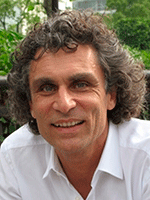 Hubert Gasteiger began his career in electrochemistry in 1993 when he received his PhD in chemical engineering from UC Berkeley, followed by postdoctoral fellowships at the Lawrence Berkeley Laboratory and Ulm University. He moved on to join the Fuel Cell Activities program of GM/Opel (Honeoye Falls, NY, USA), leading catalyst and membrane electrode assembly (MEA) research. He was promoted to GM technical fellow in 2004.

In 2007, he joined Acta S.p.A. (Italy), working on alkaline membrane-based technologies. After a one-year visiting professorship at MIT (2009) with Yang Shao-Horn, working on lithium-air batteries, he was appointed chair of technical electrochemistry at the Technical University of Munich, where he is now focusing on materials, electrode, and diagnostics development for fuel cells, electrolyzers, and lithium-ion batteries.

Gastegier is an ECS fellow, received the 2012 Grove Medal for fuel cell research, the 2015 David C. Grahame Award of the ECS Physical and Analytical Electrochemistry Division, and held the George C.A. Schuit Award Lecture at the University of Delaware in 2015.