Home / About ECS / History of ECS / Norman B. Hannay 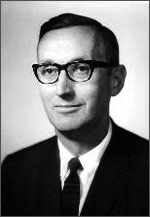 Norman B. Hannay was born in Mount Vernon, Washington on February 9, 1921. He received a B.A. degree from Swarthmore College in 1942, an M.A. from Princeton University and Ph.D. from Princeton in 1944. He was Assistant Professor at Princeton 1942-43 and Instructor of Physics 1943-44. He was associated with the Manhattan Project that developed the Atomic Bomb from 1944-1945.

Dr. Hannay joined Bell Laboratories in 1944 and became involved in chemical research programs involving fundamental studies of thermionic emission, electron attachment and ionization in molecules. His research in mass spectrographic analysis of solids led to the development of a method for detecting trace impurities in solids. Later research aimed at analyzing the semiconductor properties of silicon was an integral part of the program that lead to the silicon transistor.

He was promoted to head of semiconductor research in 1954 and moved on to head the Chemical Physics Department in 1955. These departments pioneered chemical research in semiconductors and other electronic materials including those used in solid-state lasers. He became Chemical Research Director in 1961 and Executive Director of Research – Materials Science and Engineering in 1967. In 1973, Hannay was appointed Vice-President of Research and Patents which he held until retirement in 1982.

Dr. Hannay received many major honors including the Society’s Edward Goodrich Acheson Medal Award, the Perkin Medal and Gold Medal of the American Institute of Chemists. He was awarded honorary degrees from Tel-Aviv University, Swarthmore College, and the Polytechnic Institute of New York.

Shortly before his death on June 2, 1996, Dr. Hannay completed an oral history as part of The Electrochemical Society’s series with the Chemical Heritage Foundation.