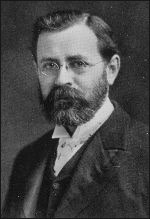 Carl Hering was born in Philadelphia, Pa on March 29, 1860. He earned a degree in Mechanical Engineering from the University of Pennsylvania and later took up Electrical Engineering under Professor Kittler at Darmstadt, Germany. Upon completion of his studies receiving a Ph.D. in 1886, he returned to Philadelphia and established an office as Consulting Engineer. In 1889, Dr. Hering was appointed United State Juror at the Paris Exposition. The French Government appointed him an Officer of Public Instruction that year and in 1901 made him a Knight of the Legion of Honor. In 1892, he became Technical Editor of Electrical World. In 1902, with Dr. E. F. Roeber and Professor J. W. Richards, he founded “Electrochemical Industry”, the forerunner of “Chemical and Metallurgical Engineering”.

The first steps in organizing the American Electrochemical Society were taken in Dr. Hering’s home in 1902. Together with E. F. Roeber, C. J. Reed, and J. W. Richards, he founded the Society in 1902. He served in all Society’s principle offices and was continuously on the Society’s Board of Directors until his death on May 10, 1926. In 1906, he was elected President of the Society, and in 1922 was made an Honorary Member. He was a regular attendant at Society Meetings missing five out of forty-nine held.