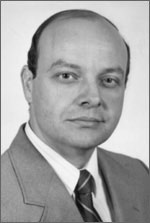 Dennis William Hess was born in Reading, PA on March 1, 1947. He received a B.S. in Chemistry from Albright College, and was awarded M.S. and Ph.D. degrees in physical chemistry from Lehigh University. His Ph.D. thesis (under the direction of Frederick M. Fowkes) involved the effects of oxygen vacancies on the electrical properties of silicon dioxide films.

In 1973, he joined Fairchild Semiconductor in Palo Alto, California, as a member of the research staff, conducting research with Bruce Deal on the thermal oxidation of silicon and the passivation of semiconductor and dielectric surfaces and interfaces by various electrical and analytical techniques, and with diffusion, metallization, ion implantation, plasma processes, and chemical vapor deposition. He later supervised CMOS process development at Fairchild.

Dr. Hess authored or co-authored over 120 scientific papers, directed over 40 M.S. and Ph.D. theses, and has been an organizer or invited speaker at over 70 technical symposia.

Dr. Hess became a member of The Electrochemical Society in 1974. He was active in the San Francisco Section serving as Treasurer, Vice-Chairman and Chairman. He was also active in both the Dielectric Science and Technology and Electronics Divisions. He served on numerous committees including Honors and Awards, Individual Membership, Education, and Linford and Acheson Award committees. He served as Divisional Editor for the Journal from 1978 to 1990. He was elected Vice-President of the Society in 1993 and served as President in the term 1996-1997. He received the 1993 Thomas D. Callinan Award of the Dielectric Science and Technology Division. He was elected Fellow of The Electrochemical Society in 1993.

Dr. Hess was also a member of AAAS, American Institute of Chemical Engineers, Materials Society, Sigma Xi, and Tau Beta Pi. He served as an associate editor for Chemistry of Materials and was a member of the editorial advisory board of the J. of Vacuum Science and Technology B.