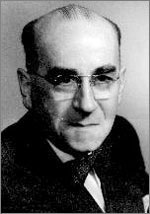 Ralph M. Hunter was born in Philadelphia August 18, 1896. He received the B.S. degree from Case School of Applied Science in 1918. During the summers while at Case, he worked for Dow Chemical in various capacities. In 1917, he assisted in the first Dow magnesium plant in Midland and poured some of the first ingots of the metal. Later he received a chemical engineering degree from Case in 1931. Case Institute of technology bestowed him with an honorary degree of Doctor of Engineering in 1950.

Hunter became a full time employee of The Dow Chemical Company in 1918 where he spent his entire professional career retiring in 1961. He was in charge of production and development of alkali chlorine cells, magnesium cells, and graphite electrodes. He developed many processes and designs in the electrolytic production of chlorine, caustic soda, magnesium, liquification of chlorine, ammonia, bromine, and titanium. He was granted 19 patents. He became Manager of the Electrochemical Division, Director and President of the Midland Ammonia Company, and Director of Dow Chemical of Canada, Ltd.

Hunter was a key man in the expansion of magnesium production and transfer of magnesium technology to other companies during World War II. He was involved in the construction and start-up of the magnesium-from-seawater plant built in Freeport, Texas in 1940. At the close of World War II he was made a member of the Technical Industrial Intelligence Committee investigating and reporting on the German electrochemical industry.