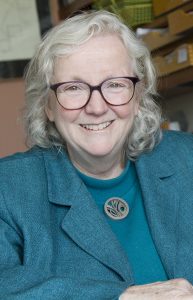 Dr. Leddy’s research interests range from fundamental electrochemistry through voltammetric methodologies and modeling to the technology of power sources. She has developed methodologies and models for voltammetric characterization of films and composites on electrodes. One major focus is magnetic effects on electron transfer processes. Her group’s incorporation of magnetic microparticles into ion exchange polymers such as Nafion® and other viscous matrices has lead to improved PEM fuel cells and higher capacity, rechargeable alkaline batteries. Leddy and her group have generated 17 U.S. patents on power sources and breath sensors and approximately 50 publications. Leddy’s students, who have produced ten doctoral dissertations and five masters theses, have assumed positions in large corporations, small start-up companies, academia, and national labs.

As a member of ECS for over 25 years, Leddy has served on various committees including the Publication and Education Committees. She has been appointed to several Society and Division award and nominating subcommittees and the New Technology Subcommittee (1997-2006). Tenure on the Education Committee (1993-2000 and 2006-present), includes two terms as Chair, 1998-2000 and at present. Leddy organized the Society Student Poster Session several times and currently works on a joint task force of ECS and the International Society of Electrochemistry to promote education and understanding of electrochemistry. She initiated the Sunday evening series, “XYZ for the Rest of Us,” which is intended to bridge the information gap between the “wet” and “dry” sides; and a new venue, under the auspices of the New Technology Subcommittee, IDEAS—Intriguing Disclosures on Electrochemical Advances Symposium, that will bring novel and new ideas to the Society in a more timely fashion. Dr. Leddy was a Member-at-Large, Secretary-Treasurer, Vice-Chair, and Chair of the Physical and Analytical Electrochemistry Division (1993-2003). Leddy organized 12 symposia on various topics for ECS; edited four symposium volumes; and twice served as a guest editor of Interface. Leddy is a member of the International Society of Electrochemistry and the Society for Electroanalytical Chemistry, where she has served as a member of the Board of Directors and has been Treasurer since 2002.