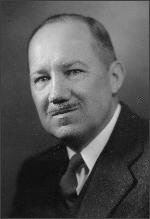 Hiram S. Lukens was born in Philadelphia on September 30, 1885. He obtained his B.S. degree in 1907 and Ph.D. in 1913 from the University of Pennsylvania. He served as Instructor in chemistry at the University of Pennsylvania from 1907 to 1913; as Assistant professor from 1913 to 1921; and as full Professor from 1921 to retirement in 1953. He served as Director of the Department of Chemistry and Chemical Engineering from 1932 to 1952. He also became Director of Research of Solidon Products, Inc. in 1924. For many years, Dr. Lukens was intimately associated with Dr. Edgar Fahs Smith. He published more than 30 scientific papers and obtained 23 patents principally in the electrochemistry field. His special areas of research were in electrochemistry and inorganic chemistry. Many of his papers appeared in the Transactions of the Society.

Dr. Likens was a civilian appointee in Chemical Warfare Service during World War I. From 1934 to 1937, he was a member of the Division of Chemistry and Chemical Technology, National Research Council, During World War II, he was Chairman of the Committee on Flatware for Army Use, War Metallurgy Committee, Office of Scientific Research and Development.

Dr. Lukens was an Honorary Member of the American Electroplaters’ Society.