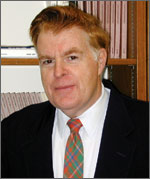 Barry MacDougall is a Principal Research Officer at the National Research Council of Canada, where he has worked for the past 30 years. He received his Honors B.Sc. from St. Francis Xavier University in Nova Scotia and his Ph.D. in electrochemistry from the University of Ottawa under the supervision of Brian Conway. He joined the NRC as a post-doctoral fellow with Morris Cohen in the “Corrosion Group” of the Division of Chemistry, and became a full NRC staff member in 1974. In 1990, Dr. MacDougall’s research focus switched to semiconductor and microstructural electrochemistry, and in 1992 he established his own research group. That group grew significantly over the following years, with an emphasis on environmental electrochemistry, electrocatalysis, energy conversion/storage, electrochemical reduction of CO2, and electrochemical process technology.

Dr. MacDougall has over 110 scientific papers, 4 active patents and 4 book chapters. He is also an adjunct professor in the Dept. of Chemistry at the University of Ottawa, where he teaches a graduate course in electrochemistry.

Dr. MacDougall has been a member of ECS for more than 31 years, and was the chair of the Ontario-Québec (now the Canadian) Section in 1979-1980. Along with several other senior members of the Section, he initiated the section name change and established the Canadian Award of the Section. He received both the Lash Miller (1979) and Jacobsen (1990) Awards of the Canadian Section. He served on the ECS Corrosion Division from 1984 to 1996, and was chair from 1994 to 1996. He helped establish the Corrosion Division’s “Morris Cohen Young Investigator Award” in 1991, named after his former mentor at NRC. He co-organized symposia on “Anodic Oxide Films” in 1981, 1985, 1992, and 2000, continuing the longestablished series begun in the late fifties. He has co-organized several other symposia, including one to honor Prof. Norio Sato at the 1999 meeting in Hawaii. Dr. MacDougall became a member of the Honors and Awards committee in 1996, and served for the next four years as chair of the Fellows Selection Subcommittee. In 2000, he became chair of the Honors and Awards Committee. Over the years, he has served on the Long Range Planning Committee, the Society Nominating Committee; he was significantly involved with the 2002 ECS Centennial Meeting, and its banquet, in Philadelphia.

From 1984 to 1992, Dr. MacDougall was a Divisional Editor of the Journal of The Electrochemical Society. He received the Young Author’s Award of ECS in 1976 and the Society’s Carl Wagner Award in 1995. He is a Fellow of ECS, the National Association of Corrosion Engineers (NACE), and the Chemical Institute of Canada (CIC).