Home / About ECS / History of ECS / Duncan A. MacInnes 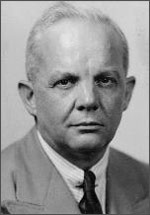 Duncan A. MacInnes was born in Salt Lake City, Utah on March 31, 1885. He received his Bachelor of Science degree in chemical engineering from the University of Utah in 1907, his Master of Science from the University of Illinois in 1909, and his Doctor of Philosophy from the University of Illinois in 1911. Dr. MacInnes specialized in physical Chemistry, both teaching and research work, at the University of Illinois. He moved to the Massachusetts Institute of Technology in 1917 and became Associate Professor in 1921. After a digression into x-ray diffraction, he continued work on solutions of electrolytes with research on liquid junction potentials and galvanic cells with transference. W. J. V. Osterhout persuaded MacInnes to come to the Rockefeller Institute for Medical Research in New York City as an Associate Member in 1926. He became a Member in 1940. The work of MacInnes and his associates at Rockefeller Institute formed the core of his book “Principles of Electrochemistry” published in 1939.

Dr. MacInnes demonstrated the importance of basic electrochemistry to the life sciences. His work on electrometric titrations led to the development of a small electrode responsive to pH. He worked with Malcolm Dole in creating a membrane-type conducting glass electrode sensitive to pH. It immediately received world-wide acceptance in research and industry. However, despite the recognition received from the pH electrode, he considered his most significant contribution to science to be the experimental verification of the Debye-Huckel theory of electrolytic solutions. He became Member Emeritus at Rockefeller Institute in 1950 but remained active in experimental research until his death. Dr. MacInnes was an enthusiastic hiker and a climber with considerable technical skill. His love of the wilderness made him an ardent and effective conservationist. He died on September 23, 1965 on vacation in Hanover, New Hampshire.

Dr. MacInnes received many honors including the Edward Goodrich Acheson Medal and Prize of The Electrochemical Society in 1948. He also received the Nichols Medal. He was elected to the National Academy of Sciences and the American Philosophical Society.